The Haqqani Network: A Strategic Threat 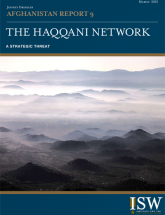 The Haqqani Network represents a strategic threat to the enduring stability of the Afghan state and U.S. national security interests in the region. The Haqqanis are currently Afghanistan’s most capable and potent insurgent group, and they continue to maintain close operational and strategic ties with al-Qaeda and their affiliates. These ties will likely deepen in the future.

Unlike the Quetta Shura Taliban in southern Afghanistan, the counterinsurgency campaign has not weakened the Haqqanis’ military capabilities significantly. Few of the “surge” resources deployed to their strongholds in Eastern Afghanistan.  The Haqqani Network has increased its operational reach and jihadist credentials over the past several years. The Haqqani Network has expanded its reach toward the Quetta Shura Taliban’s historical strongholds in southern Afghanistan, the areas surrounding Kabul, as well as the Afghan north.

The Haqqanis maintain considerable sanctuary and support nodes inside Pakistan’s tribal areas. From their safehavens in North Waziristan and Kurram Agencies in Pakistan, the Haqqanis project men and materiel to resource their terrorist campaign in Afghanistan’s southeastern provinces of Khost, Paktika and Paktia onwards to the provinces surrounding Kabul.

The Haqqanis execute spectacular attacks in Kabul in order to generate a disproportionate psychological and propaganda effect. The Haqqanis have strengthened their presence in Logar and Wardak, surrounding the southern and western approaches to Kabul. They have also expanded into Kabul’s eastern approachs in the provinces of Nangarhar, Lahgman, and Kapisa. The network will use these positions to increase their destabilizing attacks in Kabul.

The Haqqani Network has increased their presence in Afghanistan’s north, through their partnership with the al-Qaeda affiliated Islamic Movement of Uzbekistan (IMU). The Haqqani Network and IMU execute targeted assassinations of northern powerbrokers who are affiliated with the Jamiat-e Islami Party. These assassinations are meant to undermine the Jamiat party and the influence of minority powerbrokers, who are historical rivals to the Pashtuns and the Pakistani state.

The Haqqanis are ideologically committed insurgents, and they are increasing their territorial reach.  The group also has ties to al-Qaeda and its affiliates. The Haqqanis have never given any indication that breaking ties with al-Qaeda was either possible or in their interests.  Consequently, the Haqqani Network is not reconcilable.  They also do not fully follow the guidance of the Quetta Shura Taliban, because they maintain a separate power base and leadership structure.

The ANSF are not equipped to deal with the threat from the Haqqani Network in their current state.  The Afghan Security Forces lack the intelligence, enablers, and sophisticated command and control required to reclaim the enemy support zones south of Kabul.  The Afghan units are also under-filled and wrongly positioned for this fight.  American troops in a properly-resourced campaign can help reduce the threat from the Haqqani Network to a level that the Afghan Security Forces can handle.

The United States must not abruptly shift the mission of its forces in Afghanistan from counter-insurgency to security force assistance.  U.S. forces cannot curtail or cease offensive operations in the areas South of Kabul in Regional Command East in 2012.  The United States and its Afghan partners must dismantle the Haqqani Network’s strongholds in Khost, Paktika, and Paktia and contain the organization’s expansion toward Kabul prior to a shift in mission.  Failure to do so will present a strategic threat to U.S. national security interests in Afghanistan.