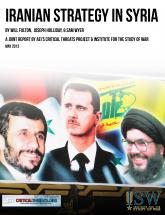 by Will Fulton, Joseph Holliday, and Sam Wyer

The Islamic Republic of Iran has conducted an extensive, expensive, and integrated effort to keep President Bashar al-Assad in power as long as possible while setting conditions to retain its ability to use Syrian territory and assets to pursue its regional interests should Assad fall.

The Iranian security and intelligence services are advising and assisting the Syrian military in order to preserve Bashar al-Assad’s hold on power. These efforts have evolved into an expeditionary training mission using Islamic Revolutionary Guards Corps (IRGC) Ground Forces, Quds Force, intelligence services, and law enforcement forces.  The deployment of IRGC Ground Forces to conflict abroad is a notable expansion of Iran’s willingness and ability to project military force beyond its borders.

Iran has been providing essential military supplies to Assad, primarily by air.  Opposition gains in Syria have interdicted many ground resupply routes between Baghdad and Damascus, and the relative paucity of Iranian port-visits in Syria suggests that Iran’s sea-lanes to Syria are more symbolic than practical. The air line of communication between Iran and Syria is thus a key vulnerability for Iranian strategy in Syria.  Iran would not be able to maintain its current level of support to Assad if this air route were interdicted through a no-fly zone or rebel capture of Syrian airfields.

Iran is also assisting pro-government shabiha militias, partly to hedge against Assad’s fall or the contraction of the regime into Damascus and a coastal Alawite enclave.  These militias will become even more dependent on Tehran in such a scenario, allowing Iran to maintain some ability to operate in and project force from Syria.

Lebanese Hezbollah began to take on a more direct combat role in Syria as the Assad regime began losing control over Syrian territory in 2012. Hezbollah has supported Assad with a robust, well-trained force whose involvement in the conflict aligns with Iranian strategic interests as Secretary General Hassan Nasrallah acknowledged on April 30 in Tehran.  Hezbollah’s commitment is not without limitations, however, because Nasrallah must carefully calibrate his support to Assad with his domestic responsibilities in order to avoid alienating his core constituency in Lebanon.

Iraqi Shi‘a militants are also fighting in Syria in support of Assad. Their presence became overt in 2012 with the formation of the Abu al-Fadl al-Abbas Brigade, a pro-government militia that is a conglomerate of Syrian and foreign Shi‘a fighters, including members of Lebanese Hezbollah and Iraq-based Asa’ib Ahl al-Haq and Kata’ib Hezbollah. Like other paramilitary forces operating in Syria, these militants escalated their involvement as the conflict descended into civil war. The open participation of Iraqi Shi‘a militants in Syria is an alarming indicator of the expansion of sectarian conflict throughout the region.

The Syrian conflict has already constrained Iran’s influence in the Levant, and the fall of the Assad regime would further reduce Tehran’s ability to project power. Iran’s hedging strategy aims to ensure, however, that it can continue to pursue its vital interests if and when the regime collapses, using parts of Syria as a base as long as the Syrian opposition fails to establish full control over all of Syrian territory.