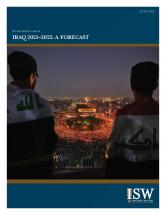 The United States cannot stabilize—or safely deprioritize—the Middle East without first stabilizing Iraq. Regional powers treat Iraq as a battleground to carry out proxy conﬂicts that harm US interests and exacerbate instability through the region. Stability begets stability; strengthening the Iraqi state such that foreign proxy wars cannot easily take place within its borders would reduce tensions in the region. A more resilient Iraqi state will be better protected from future foreign interference like internationally sponsored militia activities, political inﬂuence, and jihadism. A stable and sovereign Iraq could provide a physical and political buﬀer between its heavyweight neighbors: Iran, Turkey, and Saudi Arabia, and between Iran and its projects in Syria and Lebanon. That buﬀer could help enable a desired pivot in US policy and security focus away from the Middle East and toward pressing concerns elsewhere in the world.

Unfortunately, Iraq is not moving toward increased stability in the medium-to-long term.  The decisionmaking of external actors will likely overwhelm and derail the results of Iraqi leadership decisionmaking in the next 18 months. Continuing governance of Iraq’s corrupt political system by many of the same elites who have shared power since 2006 may produce some degree of domestic resiliency following Iraq’s 2021 elections, but will likely be unable to overcome the meddling of other regional powers.

In the spring of 2021, the Institute for the Study of War (ISW) conducted a series of workshops with internal and external experts to forecast the most likely and most dangerous trajectories for the Iraqi state in the next 18 months. This paper presents the conclusions of ISW’s research and oﬀers initial assessments of the most likely, most beneﬁcial, and most dangerous paths for US interests and Iraqi stability in that timeframe. This paper will also provide a series of alternative scenarios and highlight the indicators that can help US policymakers anticipate inﬂections and better understand the implications of major events as they occur. The paper builds on the assessments of Iraq’s stability outlined in the author’s previous paper: Iraq Is Fragile, Not Hopeless: How Iraq’s Fragility Undermines Regional Stability.

ISW found that Iraq’s internal drivers will reinforce its corrupt political status quo, providing short-term continuity without addressing the state’s deep-seated ﬂaws. Most of Iraq’s political elites, particularly the collection of Shi’a and Kurdish political faction leaders who have shared power since 2006, have bought into the country’s spoils-based political system. They will remain invested and avoid all out conﬂict or civil war so long as they retain their share of the spoils. Continuity of governance following the 2021 parliamentary elections will not improve quality of life for the Iraqi people but may increase near-to-medium-term state sta-bility and create room for a new system to develop. However, Iraq’s political and economic status quos are ultimately unsustainable. The Iraqi state cannot aﬀord to keep creating government jobs to appease its underemployed, ever-growing, and increasingly dissatisﬁed population barring a dramatic and sustained increase in oil prices.

Iraq’s stability is, in many ways, outside its control; its difficult internal dynamics are likely to be overwhelmed by larger and more threatening regional ones. Iran, Saudi Arabia, other Gulf states, Israel, and Turkey each play out their conﬂicts on Iraqi territory, destabilizing Iraq and the broader Middle East. Of these conﬂicts, those involving Iran are the most dangerous and carry the highest risk for Iraq and the region. The United States must work to manage or suppress the most negative external conﬂicts, thereby creating room for Iraq’s domestic system to evolve into one that is stronger, less corrupt, and more representative.

While Iran and other adversaries seek to coerce Iraqis into supporting corrupt policies and ideologies that harm Iraq’s future, the United States should continue to strive for a stronger, more democratic, and more independent Iraq that can provide a regional buffer to mitigate future conflicts.  It must therefore balance four oftcompeting Iraq policy priorities:

US decisionmakers must approach the Iraq problem set not only with an eye for anticipating and pre-empting the signiﬁcant political and security events of the next 18 months, but also with a whole-of-government approach intended to set conditions for a more stable Iraqi system in the decades to come. That outcome is one worthy of the last 18 years of American and Iraqi investment.