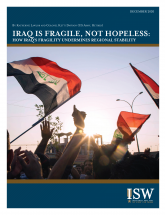 The stabilization of the Iraqi state remains strategically important to the United States and worthy of a concerted US policy effort. Iraq’s endemic domestic fragility creates space for foreign actors to play out their proxy battles, exacerbating Iraqi and regional instability in a mutually reinforcing cycle. Depriving them of that arena through the establishment of a strong, stable, and sovereign Iraqi state is therefore a prerequisite for stability in the Middle East and the preservation of US interests in the region. Stabilizing Iraq, and with it, the region, will allow the United States to pivot to other foreign policy priorities without incurring excess risk in the Middle East.

Iraq remains vital to a range of US national security efforts, including:

The Iraqi state of 2020 is fragile, but not hopeless. The influence of its historically powerful political, religious, and security institutions is decaying as the interests of elites become divorced from the interests of the Iraqi people. The decay of those institutions creates space for new participants in and real changes to Iraq’s political process. Iraqi elections scheduled for 2021 could be the last, best chance to re-establish the faith of the Iraqi people in their increasingly unrepresentative and fragmented political system. Increasing voter engagement and an expansion of nonsectarian political movements should be sources of optimism for the 2021 election cycle but require support from neutral international actors and secular civil society institutions.

The Government of Iraq lacks the capacity to strengthen and stabilize the Iraqi state, even when its leaders have the will. A renewed, whole-of-government US policy focus on capacity building is necessary to bolster the ability of those individuals and institutions who already have the will, but not the ability, to stabilize Iraq.

Iraq’s neighbors and other regional actors further destabilize the Iraqi state and exacerbate its weaknesses.

Consistent and appropriate US investments in the establishment of a stable Iraqi state must be a core component of a well-calibrated US approach to the Middle East. US troop reductions throughout 2020, US withdrawals from over a dozen joint US-Iraqi bases, and US threats to close the Baghdad embassy each signal to anti-US actors in the Middle East that the United States is on its way out of the region. Neither Iraq’s fragmented security forces nor its nascent civil society are able to take on the stabilization efforts that the country needs. The United States must consequently adopt a consistent and whole-of-government approach to Iraqi stability, stepping up its diplomatic support, stabilization assistance, and development aid to Iraq. US commitments to this approach and a small but sustainable US advisory force presence in Iraq can open doors to lasting domestic partnerships and allied support. Consistency is key; the United States must prove to its Iraqi allies that it can be a reliable partner in helping Iraqis to claim a better future. The United States must also pressure regional allies like Turkey and Saudi Arabia to respect Iraqi sovereignty and to avoid playing out their proxy conflicts in the Iraqi arena.

The United States can still achieve an outcome worthy of 17 years of American and Iraqi sacrifice and investment. US policymakers must understand Iraqi realities—meeting Iraq where it is, rather than where they wish it to be—to achieve that desired outcome. This paper describes those Iraqi realities; it is intended as a primer for US decisionmakers as they frame their policy approach.