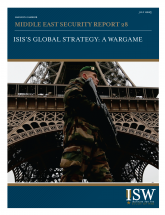 The United States currently faces multiple national security threats in an environment of growing disorder. ISIS is executing a sophisticated global strategy that involves simultaneous efforts in Iraq and Syria, the Middle East and North Africa, and the wider world. Homegrown terrorism is increasing in the U.S. and Europe. Civil wars are intensifying in Ukraine, Yemen, and Libya, while the U.S. attempts to pivot to the Asia-Pacific. In this complex environment, it is difficult for policymakers to discern the consequences of action or inaction even in the near future.

The Institute for the Study of War (ISW) conducted simulation exercises on February 27 and March 16, 2015 to discover the diplomatic and military opportunities and pitfalls likely to arise in the coming months of the counter-ISIS fight. Several developments that ISW predicted during the simula­tion have already occurred. Identifying these scenarios and opportunities in advance can enable the U.S. and its allies to make better-informed decisions in the long-term.

ISW’s simulation focused on possible outcomes of ISIS’s regional activity. The anti-ISIS coalition is currently focused on ISIS only within Iraq and Syria. Therefore the U.S. is vulnerable to strategic surprise resulting from ISIS’s external activity. ISIS has the potential to pressure and divert allies that are critical to the U.S.-led coalition’s efforts, while continuing its own expansion program. Simulating the effects of ISIS’s endeavor in advance revealed insights that will assist in the creation of a coherent counter-ISIS strategy, rather than a piecemeal strategy formulated as crises occur.