The Islamic State: A Counter-Strategy for a Counter-State 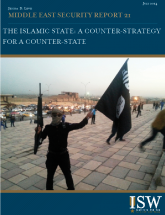 Many have asked what needs to be done about the Islamic State of Iraq and al-Sham (ISIS), the terrorist organization that recently took control of Mosul, Iraq’s second largest city. Questions range from the acceptability of airstrikes and the viability of a national unity government in Iraq to the feasibility of a counter-offensive that depends upon the remaining capacity of the Iraq Security Forces. These are important and worthy questions, and timely, because ISIS is growing stronger. But these questions preempt the rigorous analysis that is required in order to determine what the U.S. should do about ISIS and why.

ISIS is no longer a mere terrorist organization, but one that operates like an army. It is no longer just an army, but one that is conquering land in Iraq and Syria to establish new ideological rule, in line with al-Qaeda’s endgame. This is no longer a war of ideas against an extremist group with sparse networks, flashy strategic messaging, and limited technical offensive capability. It is necessary to avoid framing a U.S. counter-terrorism strategy to defeat ISIS as if it were. It is particularly important to move beyond narratives of simple or piecemeal solutions. Individual actions are insufficient to dislodge what has become an entrenched strategic adversary.

ISIS draws strength from the complex circumstances that are independently causing Iraq and Syria to fail, including domestic civil and sectarian cleavages, authoritarian leadership, and polarizing regional stressors. Any counter-strategy to defeat ISIS also requires a nuanced strategy to preserve all U.S. foreign policy objectives in the Middle East that are deeply affected by the recent take-over of Iraq’s major cities by ISIS. And yet these considerations call for action rather than deterrence. The ISIS threat is growing, and it threatens the permanent destruction of Iraq and Syria, which will generate exponential threats to U.S. interests abroad.

ISIS is already a threat to the United States. ISIS is not only dangerous in a regional context because it is overthrowing modern state boundaries in ways that incur massive ethno-sectarian killing and cleansing. ISIS is also a global jihadist organization that shares al-Qaeda’s ideology, such that its progress drives towards a post-state and apocalyptic vision that involves the destruction of the modern state system. ISIS already threatens to escalate violence between states in the Middle East that have been fighting proxy wars in Syria for several years such that ISIS military operations may cascade into a broader regional conflict. ISIS is now a direct threat to neighboring states in the Middle East, and ISIS is broadcasting the intent to attack Saudi Arabia, Israel, and the West. The threat of attacks against the U.S. is present.

It is therefore necessary for the U.S. to consider ways to defeat ISIS, not only to preserve the integrity of the Iraqi state, but to preserve our own security. Defeating the Islamic State will, in fact, be very difficult. Developing a strategy to do so will be very hard. But hard is not the same as impossible. As pressure grows in Washington for a response to the crisis that has engulfed the region, policymakers must move beyond the assessment phase and begin building a comprehensive strategy. This effort must begin with a close examination of the sources of strength, intentions, and vulnerabilities of the Islamic Caliphate created by ISIS. Only then can a coherent counter-strategy emerge. First, we must understand the threat.

This report provides a strategic analysis of the sources of strength and weakness for ISIS. It adapts existing military frameworks to support the development of meaningful national security strategies to counter ISIS. This report does not attempt to formulate a comprehensive counter-strategy, but instead provides a way of conceptualizing such counter-strategies in light of how ISIS forms its own strategy for military and political gain. The frameworks in this study include an evaluation of the ISIS grand strategy and its military objectives in Iraq and Syria; a Center of Gravity analysis to identify the core sources of ISIS’s strength; and a rubric to understand how main efforts and supporting efforts can combine to bring out the strategic defeat of ISIS.

This report finds that the defeat of ISIS must address two Centers of Gravity. The first is a classical military center of gravity that ISIS uses to wrest physical control from modern states and hold what it has gained. The second ISIS center of gravity is a political capacity to provide essential state functions within the territory that ISIS controls. ISIS strength emanates from the ability to translate military control into political control, and thereby to claim that the Caliphate is manifest. A strategy to defeat ISIS must break this synergy among the military and political operations of ISIS and its layered leadership. The U.S. must consider ways to accomplish this in order to propel the strategic defeat of ISIS. Destroying its Critical Capabilities, denying its Critical Opportunities and Critical Requirements, and exploiting its Critical Vulnerabilities are additional component effects that must be synchronized in order to achieve this strategic effect.

A strategy whereby ISIS remains in control of Mosul, Raqqa, and other urban centers in Iraq and Syria will fall short of the desired outcome. Settling for lesser aims or resolving to do nothing are equal. The threat of ISIS is real and expanding, but ISIS is also vulnerable at its present political formation stage. It is vital to design a cogent counter-strategy, and soon, or this door will close.