The Islamic State of Iraq Returns to Diyala 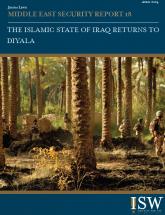 Anbar is not the only front in Iraq on which Al Qaeda in Iraq (AQI), now operating as the Islamic State of Iraq and Sham (ISIS), is fighting in 2014. ISIS has also established a governorate in Diyala. Its spokesman has named the province the central front in the sectarian conflict he has urged. The security situation and sectarian tension in Diyala province are grave. ISIS has returned to fixed fighting positions within Muqdadiyah, Baqubah, and the Diyala River Valley. Shi’a militias are now active in these areas as well. Increasing instances of population displacement demonstrate the aggregate effect of targeted violence by both groups. It is important to estimate the effects of this displacement and the presence of armed groups within Diyala’s major cities in order to understand how deteriorated security conditions in this province will interfere with Iraq’s upcoming parliamentary elections. Furthermore, violence in Diyala has historically both driven and reflected inter-ethnic and inter-sectarian violence in other mixed areas of Iraq, including Baghdad. Diyala is therefore a significant bellwether for how quickly these types of violence will spread to other provinces.

The Islamic State of Iraq and Sham (ISIS) nominally re-established its Wilayat, or Governorate, of Diyala in late December 2013, at the same time the organization captured positions in central Fallujah. The announcement of an ISIS Diyala Wilayat signifies that ISIS’s objective is ultimately to govern the whole of the province. Diyala is central to its campaign, and it is important to monitor the organization’s progress on its eastern front while ISIS continues to fight in Anbar. ISIS spokesman Abu Mohammed al-Adnani affirmed in 2013 that the war against the “Rafidah,” a derogatory term for Shi’a, would be waged primarily in Diyala.

The Diyala governor acknowledged the risk, stating that the intent of violent actors in Diyala is to create sectarian tensions and to disrupt the goals of the Diyala government. The question in Diyala may no longer be one of resolving political disputes, but one of combating sectarian mobilization instigated by ISIS, and mitigating the effect that mutual violence may have on political opportunities on the eve of national elections. ISIS and Shi’a militias are on the rise in Diyala, and they are active in the heart of the province, the Diyala River Valley connecting Muqdadiyah to the provincial capital at Baquba. This rise has been taking place over time. This report will document the movement of AQI and its successor, ISIS, from northern Diyala to Baquba from 2012 to the present day.

DIYALA'S POLITICAL VACUUM
Diyala has experienced significant political turbulence over the last few months that have made it increasingly vulnerable to ethno-sectarian strife. This outcome seemed less likely immediately after the provincial elections in 2013, when Diyala witnessed a unique political accommodation in which the Sadrist Trend broke from the other Shi’a parties and aligned with the primarily Sunni Mutahidun bloc. This arrangement was not regarded well by some parties and powerbrokers; Mutahidun governor Omar al-Humairi was nearly arrested in November 2013 on charges of corruption, which he claimed were politically motivated. In December 2013, the Federal Administrative Court ratified a decision to dissolve the Diyala Provincial Government, claiming the session during which the governor and provincial council chairman were selected was illegitimate for lack of a quorum.
Consequently, a new governor, Amer al-Majmai, who split from his predominantly Iraqi Sunni list, was elected in December 2013, and member of the Iraqi Shi’a Badr organization, Muthana al-Tamimi was elected as chairman of the council. These changes were condemned by Humairi, who accused Majmai of purging his opponents in the local government. These actions demonstrate the challenges inherent in forming a local government in a mixed Sunni, Shi’a, and Kurdish province with many interlocking political and social rivalries.
Unfortunately, the politics of Diyala are now framed in the context of increasing levels of violence generated by the Islamic State of Iraq and al Sham (ISIS), the successor to AQI, which has centered its concept for an Islamic emirate around a capital in Diyala for many years. According to the biography distributed on jihadist forums, the leader of ISIS, Abu Bakr al-Baghdadi, has close family ties to the Bobadri tribe in Diyala. His aspirations for Diyala are likely consistent with that of Abu Musab al-Zarqawi, given that Baghdadi’s spokesperson announced its centrality to the campaign, as noted above.