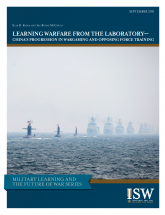 The Chinese People’s Liberation Army (PLA) is faced with the challenge of preparing for future warfare during peacetime as a force that lacks contemporary operational experience. Among the methods through which the PLA seeks to enhance its combat readiness are sophisticated wargaming and realistic, force-on-force exercises. Chinese military leaders regard wargaming (bingqi tuiyan, 兵棋推演) as an important technique by which to “learn warfare from the laboratory” for training purposes and to promote insights on the dynamics of future combat. This style of learning is complemented by the PLA’s study of military history and emulation of the experiences and innovations of foreign militaries, including through creating “blue forces” that simulate potential adversaries against which to train. Beyond improving its current capabilities and readiness, the PLA also aspires to achieve an edge in military competition, seeking to “design” the dynamics of and develop capabilities for future warfare.

Wargaming is part of a cycle of military learning and experimentation that involves and informs exercises against opposing forces (OPFOR), as well as a range of other styles of training. While this report does not provide a comprehensive assessment of the PLA’s current training methods, our analysis examines select aspects of the PLA’s computerized wargaming and employment of blue (i.e., simulated adversary) forces in the context of the continuing transformation of PLA training. Over time, the PLA has improved the realism of its “actual combat training” (shizhan hua xunlian, 实战化训练) and undertaken exercises in increasingly challenging battlefield environments. The lessons learned from wargaming can be tested in exercises, and the outcomes of exercises can shape the design for wargames.

PLA wargaming and development of their blue forces continue to be significantly influenced by emulation of the approaches of foreign militaries, particularly those of the US military. The combination of domestic and foreign influences has resulted in features unique to the PLA, reflecting distinct priorities, interests, and constraints. In wargaming, for example, the PLA appears to prefer and prioritize computerized approaches over other forms, and it has attempted to leverage this cost-effective technique in training to address certain long-standing weaknesses, such as in command decision-making. To that end, the PLA has scaled up wargaming in professional military education (PME), especially through programming at the PLA’s National Defense University (NDU). The history and political character of the PLA as the armed wing of the Chinese Communist Party (CCP) also appear to be a notable influence, demonstrated by the experimentation with political warfare in PLA wargaming.

Meanwhile, wargaming has become prominent and popularized across China, and the PLA has leveraged the commercialization of wargaming to improve its quality and realism. Ongoing advances in video games and innovations from the video game industry continue to provide China’s armed forces with new options for realistic, engaging wargames. Under the auspices of China’s national strategy for military-civil fusion (MCF), several technology companies have partnered with the PLA to develop new systems for wargaming and military simulations. Beyond PME efforts, wargaming competitions have become an important element of national defense education, as thousands of military and civilian students across universities nationwide participate in annual wargaming competitions. This national initiative encourages patriotism and interest in military affairs among the public while fostering greater unity and understanding between military and civilian stakeholders.

Increasingly, the PLA is pursuing innovation in the platforms and techniques used in wargaming, including the introduction of artificial intelligence (AI). The PLA has introduced “intelligentization” (zhinenghua, 智能化) as a priority for its military modernization. This strategic initiative includes the development of AI for military applications and leveraging wargaming platforms to advance technological experimentation. The progress to date includes PLA contests and competitions that have concentrated on developing AI systems for wargaming in complex scenarios. Starting in 2017, these efforts have seen the development of more powerful AI systems across years of competitions. The human-machine confrontation (renji duikang, 人机对抗) that can occur through such a virtual platform also could allow for improvements in planning and decision support systems for future joint operations. The increasing capabilities of AI systems in wargaming also allow for improvements in simulated adversaries. Beyond the objective to improve the quality of their wargames for training purposes, there are scientists and strategists in the PLA who hope AI will become powerful enough to facilitate human planning and command decision-making in future warfare.

The PLA’s OPFOR program has centered upon the creation of blue forces that are intended to imitate potential adversaries. These units are directed to serve as whetstones to increase the challenge of training, thereby contributing to the PLA’s efforts to overcome its “peace disease.” While the PLA’s OPFOR efforts have been unique in their variety and potential creativity, the relatively fragmented development highlights the issues of coordination and standardization that have often impeded progress within the PLA. However, the increasing professionalism of these initiatives, including the focus on simulating the United States and its allies as anticipated adversaries, is an important dimension of PLA preparations to watch going forward.

This report starts by tracing the trajectory of wargaming within the PLA in modern Chinese history and then continues to examine the progression of PLA blue forces in its OPFOR program. The analysis initially reviews a series of recent wargaming competitions, examining the introduction of AI systems into wargaming and considering commercial contributions to wargaming. Our research also considers the progression of OPFOR exercises (exercises that involve a force tasked with representing an enemy) that have expanded and increased in sophistication with the use of improved blue forces. We examine what wargaming and OPFOR exercises can reveal about the PLA’s capacity to learn and adapt to the challenges of future warfare. In closing, we raise considerations and potential recommendations for US policy. 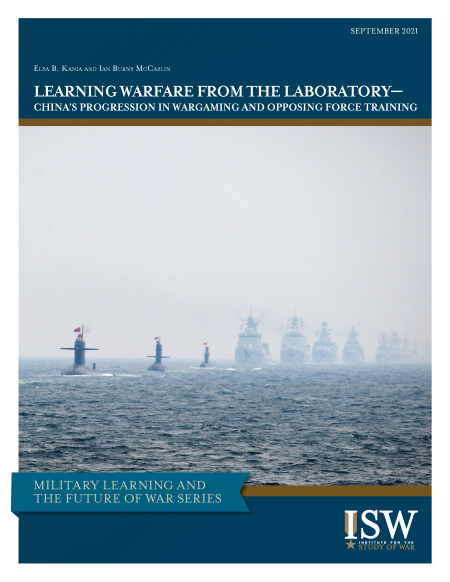