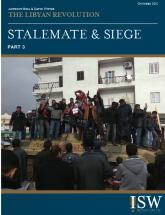 This report is the third installation of a four-part series on the revolution in Libya. Part Three: Stalemate and Siegedetails the progress of fighting in eastern and western Libya and the international response. The paper begins by explaining the battle of Cyrenaica, documenting loyalist and rebel offensives before the situation settled into a stalemate. The second section details the siege of Misrata and explains the tactics and organization used by forces on both sides. The paper then documents the Misrata sealift, and the contribution of international actors to rebel efforts. Lastly, the paper examines the rebel breakout from Misrata, as well as efforts to end the conflict through a negotiated settlement.