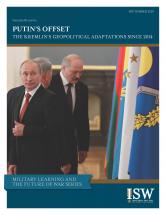 How Does Putin Succeed or Fail at Achieving His Goals?

Several sources of resilience have allowed Putin to retain power for 20 years. Putin understands Russia. He offers a limited and periodically changing but nevertheless real value proposition to the Russian people and other countries. He has several sources of real power, including nuclear weapons, a global military footprint, and veto power on the UN Security Council. Putin’s grip on Russia’s domestic narrative and the capabilities he has developed to influence the global narrative are other major sources of strength.

Putin adapts to the changing geostrategic environment. He has dynamically updated his value proposition to his constituencies in Russia over the past two decades. Putin recalibrated the methods he uses to achieve his foreign policy objectives after 2014 without fundamentally altering those objectives. Most recently, Putin has shown he is willing to experiment with less oppressive tactics for taming public discontent in Russia. He has allowed the 2020 anti-Kremlin protests in Russia’s Far East to simmer without suppressing them for far longer than he would have done in the past, for example. He is evolving Russia’s hybrid warfare approaches as he is exploiting anti-government protests in Belarus to regain control over that former Soviet state.

Putin’s power has real and growing limits, however. Putin is accumulating risk on fundamentals such as Russia’s economy and human capital, as both deteriorate. What Putin can offer Russia and its foreign partners is also limited, and in some cases harmful. Putin recognizes these problems but is unlikely to be able to significantly expand Russia’s resources and capabilities. His kleptocratic regime is incompatible with the reform required to meaningfully grow Russia’s economy. Additionally, Putin’s efforts post-2014 have skewed toward damage control and constraint mitigation, not toward improving Russia’s fundamentals. He has focused, for example, on controlling Russian society more effectively and pressuring other countries in a more lasting way rather than reforming Russia or becoming a more appealing international partner.

Putin must increasingly sustain the perception that an alternative to his rule in Russia is either worse or too costly to fight for. Putin’s reliance on his ability to shape the narrative is thus an existential requirement.

Putin no longer has the luxury of covering his actions in Russia in legalisms. For two decades, Putin tried to maintain a façade of democracy in Russia and repeatedly stated he would not change the constitution to suit his political agenda.1 Putin, however, openly did just that in 2020 to give himself effectively the opportunity to rule for life.

The façade of legitimacy, which Putin has generally seen as important to the effectiveness of his approach, is also a limit on the Kremlin’s actions globally. The Kremlin stopped its offensive in eastern Ukraine in 2014 at the limit of its “information frontier” — the point at which Russia ran out of information cover to advance its campaign in a hybrid manner — without openly committing to a full-fledged military offensive on Ukraine. The Kremlin planned to capture six regions in Ukraine but was only able to secure portions of two regions in part because the Kremlin greatly overestimated support for the idea of the “Russian World”[i] among the population in Ukraine. That lack of support stripped the Kremlin of the information cover it required to seize additional areas. As a result, Putin had to accept a lesser objective, at least for a while, than he initially planned to accomplish.

Some of Putin’s post-2014 efforts exposed Russia to additional vulnerabilities. For example, Putin’s pivot to non-Western powers, especially China, to offset losses resulting from deteriorating relationships with the West may backfire in the long run. The economic power imbalance between Beijing and Moscow is so great that Putin cannot be confident in his ability to prevent China from imposing costs and limitations on him over time that he is in principle unwilling to accept.

The Kremlin has experienced numerous setbacks as the result of its limitations, such as failing to prevent the expansion of NATO in the Balkans in 2017 (when Montenegro joined) and again in 2020 (with the admission of North Macedonia) despite Kremlin efforts. The effectiveness of several key Russian foreign policy pressure tools, such as the Russian Orthodox Church and Russia’s energy exports, is also falling as many countries are trying to limit their exposure to Russia’s influence.

Putin exploits the forces that drive the West toward accepting his gains and dropping pressures on him. He accelerates the erosion of memory of Russian aggression. He uses legitimate causes such as counterterrorism cooperation to pull countries into Russia initiatives and legitimize his malign activities. He refocuses his opponents away from their long-term interests and from the leverage they hold vis-à-vis Russia towards the short-term benefits or costs the Kremlin can inflict on them. He benefits from the desire for normalcy in the West and the ingrained reluctance to engage in confrontational policies toward Russia.

The West’s tendency to ignore Russia’s trivial activities is another major opportunity for Putin. Slow, under the radar creep, often at the tactical level, is generally how the Kremlin sets conditions for strategic gains.

Another Western vulnerability is the inclination to mistake the Kremlin’s sloppiness and adaptability for opportunism. This inclination results in part from the fact that Putin does move rapidly when he sees opportunities and often jumps from one theater to another in a way that appears to lack coherence to a Western audience that regards, say, the Middle East and the Baltics as entirely separate issues. In reality, Putin has pursued the same goals consistently for years. He has shown a willingness to accept losses to advance his larger efforts. The Kremlin’s means of pursuing these goals are being designed and improved to support them, even though their execution is often ineffective, poorly coordinated, and even counterproductive.

The West must also understand that when the West legitimizes the Kremlin’s narratives and joins its international frameworks is provides oxygen to two major amplifiers of Putin’s power. Without this oxygen, Putin would likely be brought down closer to his actual size.

Putin's efforts since 2014 have been increasingly focused on shaping, not just disrupting, an international environment that will foster Russian interests and provide the Kremlin with resources and legitimacy. Putin likely has assessed that the long-term solution to deflect international pressure is to create an environment that will accept Russian principles and narratives and limit the need for it to use coercive measures against Russia.

Putin’s core lines of effort that support this aim:

Putin’s sources of resilience and his adaptations will allow him to maintain his regime and his international campaigns on the current trajectory for a while. Putin’s offsetting efforts do not fundamentally change Russia’s strengths, but they help Putin buy time while he attempts to erode anti-Russia efforts globally and gradually build influence in multiple theaters. Putin’s future gains are not a given, however. Putin’s hand remains weak. The cost of maintaining Putin’s power will only grow, as will the cost of his foreign adventures.

The US can take several steps to halt the Kremlin’s malign activities and gains:

CONTINUE READING THE REPORT (PDF)
Return to the Military Learning & Future of War Homepage
i.  Putin defined the “Russian World” as "uniting all those spiritually connected to Russia and who consider themselves carriers of Russian language, culture, and history."
ii.  Putin’s framing of his policies increasingly focuses on making Russia independent from Western influence, including creating Russia’s "sovereign internet," decreasing the use of the dollar, and solidifying the priority of Russian laws over international laws in the constitution. These efforts isolate Russia from the international community.
Offsite Authors:
Nataliya Bugayova