The Resurgence of Asa'ib Ahl al-Haq 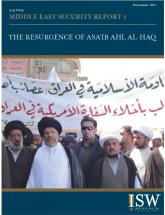 This report examines the political, religious, and military resurgence of Asa’ib Ahl al-Haq (AAH) in Iraq since the withdrawal of U.S. Forces, identifying the group’s key actors, their present disposition and strategy, and their regional expansion. AAH is an Iranian-backed Shi’a militant group that split from Moqtada al-Sadr’s Jaish al-Mahdi (JAM) in 2006. Since that time, AAH has conducted thousands of lethal explosively formed penetrator (EFP) attacks against U.S. and Iraqi forces, targeted kidnappings of Westerners, rocket and mortar attacks on the U.S. Embassy, the murder of American soldiers, and the assassination of Iraqi officials.

AAH has close connections to Iran. The Lebanese Hezbollah operative Ali Mussa Daqduq, who was detained by coalition forces in 2007 and released from Iraqi custody in November 2012, provided organized training to AAH fighters. He reported to Youssef Hashim, the head of Lebanese Hezbollah Special Operations; the latter reported to Abdul Reza Shahlai (AKA Hajji Yussef), the director of Iranian Qods Force External Operations. Abdul Reza Shahlai was the mastermind behind the disrupted 2011 plot to assassinate the Saudi Ambassador to the United States in Washington, DC. All reported to Qassem Soleimani, the head of the Islamic Revolutionary Guard Qods-Force (IRGC-QF).

Asa’ib Ahl al-Haq is led by Qais al-Khazali, a student of Moqtada al-Sadr’s father, Mohammed Sadeq al- Sadr. Qais was detained by coalition forces in March 2007 along with Daqduq, but he was released from custody in early 2010. Additionally, Mohammed al-Tabatabai, Akram al-Kaabi, Laith al-Khazali (the brother of Qais), and Hassan Salem remain part of AAH’s core leadership. Kazim al-Abadi joined the organization after leaving the Sadrist Trend sometime prior to 2010.

AAH is resurgent. The group represents a significant threat to U.S. interests and any U.S. presence in Iraq, given its continued record of lethal activity, its Khomeinist ideology, and its current political ascension. Moreover, the group offers a vehicle for increased Iranian influence in political and religious affairs.

During the Iraq War, Asa’ib Ahl al-Haq adamantly opposed U.S. occupation. Now that the bulk of the U.S. military has withdrawn, AAH’s current objectives are assessed to be:

After the withdrawal of U.S. forces in December 2011, AAH announced the intention to halt armed resistance and formally join the Iraqi political process. Iraqi Prime Minister Nouri al-Maliki facilitated this transition through outreach to Qais al-Khazali. AAH has adopted the Lebanese Hezbollah model to garner popular support. In 2012, AAH rebranded itself as a nationalist Islamic resistance organization, expanding its outreach among Iraq’s minorities and establishing political offices throughout the country. It also assumed the role of a charitable organization. AAH has, consequently, grown rapidly as a political group.

Asa’ib Ahl al-Haq and the Sadrists have competed for dominance as the champions of Shi’a religious activism in Iraq since 2006. This competition has escalated following AAH’s move into politics, as demonstrated by a political assassination campaign in 2012. This campaign also indicates the current operational status of AAH’s militia, which the group has maintained despite its turn towards politics. This militia is likely led by Hassan Salem, and it is capable of projecting influence by force within Iraq, and likely into Lebanon and Syria at Iran’s behest.

AAH has accumulated a large political presence within Baghdad since 2010. It currently operates two political offices in the city, one in Kadhimiya and one in Rusafa. These offices oversee all AAH political activity in the capital as components of a larger Political Bureau. Additionally, AAH has held a number of public events that have been attended by AAH core leadership and representatives from the Iraqi government. Political activity in Baghdad has largely been used to promote AAH’s new public image as a nationalist Islamic resistance organization.

Outside of Baghdad, AAH has established political offices in Basra, Najaf, Hillah, al-Khalis, and Tal Afar. Furthermore, the organization has dispatched political delegations to meet with tribal and minority leaders in provinces of Dhi Qar, Muthanna, and Maysan. The political expansion of AAH throughout Iraq demonstrates the organization’s ability to penetrate areas with heavy Sadrist support. According to an interview with al-Mada Newspaper, however, AAH will not be participating in the 2013 provincial elections as an independent entity. This move, if true, is surprising given AAH’s political expansion. It may either reflect that AAH is not organizationally prepared to compete or that the group seeks to exercise political influence by other means. Indirect participation may allow AAH to posture for the much more significant 2014 parliamentary elections.

AAH has also made concerted efforts to influence regional Shi’ite religious networks. The establishment of the “Seal of the Apostles” religious school network in Iraq has allowed AAH to coordinate and control the dissemination of AAH religious and political thought in Baghdad, Maysan, Basra, Dhi Qar, Najaf, and Samawah. AAH is again using religious networks for recruitment and propaganda purposes as a method of political activism. In this way, AAH subtly promotes Iranian regime interests while cultivating a nationalist public identity.

Asa’ib Ahl al-Haq also expanded its political activities into Lebanon. By early 2011, AAH established a political representation in Beirut, headed by Sheikh Ammar al-Delphi. He met with a number of senior members of Lebanese Hezbollah, Hamas, Shi’ite religious organizations, and the Lebanese government that year. The extension of AAH throughout Iraq and into Lebanon suggests that the organization receives substantial Iranian funding and support. AAH once again plays an integral role in Iran’s regional proxy strategy, augmenting Lebanese Hezbollah in the struggle for Syria. Iranian-backed Shi’a militants, including elements that would become AAH, had previously participated directly in the 2006 war between Lebanon and Israel. Ali Mussa Daqduq was crucial in the solidification and training of AAH between 2005 and 2007.

The resurgence of AAH is an alarming development in Iraq because of the group’s objectives and close ties to the IRGC-QF. Looking ahead to 2013, AAH will continue to marginalize Moqtada al-Sadr and usurp Sadrist support within Iraq. If successful, AAH will emerge as the principal Shi’a activist organization in Iraq. As such, it will enhance Iranian political and religious influence in Iraq and greatly augment Iran’s regional proxy strategy. An enriched and militarily capable AAH militia may also threaten any U.S. presence in Iraq today, including its diplomatic presence. AAH is likely to become an increasingly capable and unrestrained proxy force that enhances other Iranian regional interests over time.