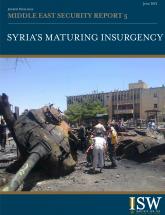 This report examines the increasing effectiveness of Syria’s armed opposition, explains how responsible provincial-level military structures have emerged, and considers how uncoordinated external support could compound existing fractures within the opposition.

Syria’s maturing insurgency has begun to carve out its own de facto safe zones around Homs city, in northern Hama, and in the Idlib countryside. The Assad regime seized key urban centers in Damascus, Homs, and Idlib during offensives in February and March 2012. However, the rebels successfully withdrew into the countryside, where they operate with impunity. As of June 2012, the opposition controls large swaths of Syria’s northern and central countryside.

The Assad regime does not have the capacity to continue offensive operations while holding the key terrain it cleared in the spring. Currently, the regime is postured to hold Damascus, Homs, and Idlib, but not to defeat the insurgency that prospers in the countryside. In order to direct a new offensive against rebel strongholds outside of Homs city and in the Idlib countryside, the regime will have to consolidate forces for a large operation, which could compromise regime control of the urban areas. Increased direct military assistance from Russia or Iran could substantially mitigate this risk to the regime.

Syria’s loyalist security forces will have to balance competing priorities in the summer of 2012. First, they must ensure that fighting does not spread further in northern Aleppo and coastal Latakia provinces. Second, they must regain control of rebel strongholds to the north and south of Homs city. Finally, they must disrupt de facto rebel safe zones in northern Hama and the Idlib countryside.

The insurgency has expanded to an estimated 40,000 men as of late May 2012. New local rebel groups continue to form, which presents a challenge to command and control. However, responsible operational-level structures have emerged in the form of provincial military councils that derive legitimacy from the local rebel groups operating under their command. The provincial military councils operate under the umbrella of the Free Syrian Army (FSA ), but make their own operational decisions.

The conflict in Syria is approaching a tipping point at which the insurgency will control more territory than the regime. Neither the perpetuation nor the removal of Assad will guarantee Syria’s future stability. In order to prevent Syrian state failure, the insurgency must mature into a professional armed force that can promote and protect a stable political opposition.

Increased external support for Syria’s insurgency has contributed to its success on the battlefield, but the resulting competition for resources has encouraged radicalization and infighting. This ad hoc application of external support has undermined the professionalization of the opposition’s ranks. Carefully managing this support could reinforce responsible organizations and bolster organic structures within the Syrian opposition.

The priority for U.S. policy on Syria should be to encourage the development of opposition structures that could one day establish a monopoly on the use of force. External support must flow into Syria in a way that reinforces the growth of legitimate and stable structures within the Syrian opposition movement. This will mitigate the regional threats of Syrian state failure and prolonged civil war.