Ninewah province is located in northwest .  It borders to the west and the of Dahuk and to the north and east.  Ninewah covers 14,410 square miles and is home to an estimated 2.5 million people making it ’s third largest province behind al-Anbar and al-Muthanna and second most populous province behind .  Ninewah’s capital city, , lies on the upper .  It is a key city for the Sunni insurgency and al Qaeda in Iraq (AQI) has proclaimed it the capital of the Islamic State in .  Tal Afar, 30 miles west of , is the province’s second largest city and has also been an important battleground against the insurgency in .

The upper Tigris River Valley and Main Supply Route Tampa, which is a major highway that runs from the Syrian border through Mosul and down the Tigris through Baiji, Tikrit, Samarra, and Balad to Baghdad, have functioned as primary lines of communication, supply, and foreign terrorist facilitation for the Sunni insurgency and, in particular, AQI.  Mosul is the first major city upon entry from into and has traditionally been a hub for the Sunni insurgency in the north. South of Mosul, the Za’ab triangle has functioned as an AQI safe haven, given the absence of Coalition forces prior to September 2007.

and Tal Afar emerged from the 2003 invasion relatively unscathed.  Along with a strategic bombing campaign, the 10th Special Forces Group working with Kurdish peshmerga secured on April 11, 2003.  was later occupied and served as the operational base for the 101st Airborne Division under General David Petraeus.  On June 22, 2003 Uday and Qusay Hussein were targeted and killed in .

Following an increase in the operational tempo in the spring of 2007, Coalition and Iraqi Forces have steadily targeted AQI in . From 2007 to the present, a series of offensive operations have significantly degraded the AQI leadership network in .  These operations were: Operation Lion's Roar, Operation Mother of Two Springs, and Operation New Hope. Coalition and Iraqi forces have conducted almost daily targeted raids killing or capturing AQI emirs, terrorist cell leaders, foreign facilitators, financiers and media operators.  Operation New Hope also included a number of quick-impact reconstruction projects in cleared neighborhoods of Mosul. 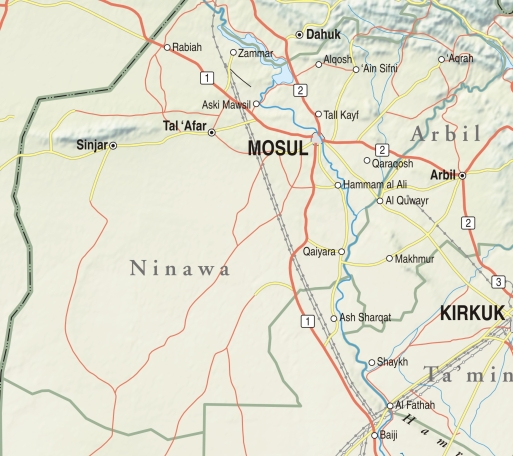