The northwestern Baghdad belt, stretching from Karmah west of Baghdad to Tarmiyah in the north, has been a sanctuary for al-Qaeda in Iraq (AQI) since January 2007, when the capital of the Islamic State of Iraq (ISI) was displaced from Diyala province to Tarmiyah. AQI used this territory to shift fighters and supplies between Anbar, Salah ad-Din, and Diyala provinces, to build vehicle-born improvised explosive devices for use against US forces and within the capital of Baghdad, and to establish the quasi-legal structures of the Islamic State of Iraq that constitute the entirety of AQI’s political program.

From the beginning of Operation Fardh al-Qanoon through the beginning of Operation Phantom Thunder on June 15th, US forces tried to contest Al-Qaeda control of these areas.  US forces operating in and around Karmah conducted a number of preparatory operations in April and May prior to the launch of Phantom Thunder. An Al-Qaeda military emir was killed northwest of the city in an operation on April 20th, and in a series of intelligence-driven raids, Al-Qaeda associates and financial facilitators were targeted in Karmah in early May, including a group responsible for the construction of chlorine VBIEDs.  Later in the month, US forces discovered an AQI torture house linked to a kidnapping ring in Karma itself.  The discovery of weapons caches in the area continued into 2009, and 11 suspects were arrested in March 2009 on suspicion of involvement in terrorism.

Although General Odierno later identified the area stretching north from Karmah to Lake Thar Thar and east to Taji as a “known Al-Qaeda transit route,” it was left largely uncontested until the arrival of the 13th Marine Expeditionary Unit in late May and the launch of Operation Phantom Thunder.

Further to the east in Taji and Tarmiyah, US forces conducted a variety of preparatory operations prior to Phantom Thunder. US forces established a combat outpost in Tarmiyah in February and it was attacked shortly thereafter by Al-Qaeda in a coordinated attack using both a VBIED and small arms.  US forces detained a senior AQI leader in Tarmiyah in April in an intelligence driven raid.  This raid was followed by a series of preparatory raids just prior to Phantom Thunder that targeted an AQI financial emir, an associate of the AQI religious emir in Tarmiyah, and close associates of AQI leaders, including one associate of Umar al-Baghdadi, a.k.a. Abu Ayyub al-Masri.

The emphasis of Operations Phantom Thunder and Phantom Strike in this area has been the disruption of al-Qaeda in Iraq activities, the denial of the Tarmiyah-Thar Thar-Karmah triangle to AQI, and the clearing of the area in preparation for the assumption of additional resposibilities by Iraqi Security Forces (ISF). The 13th Marine Expeditionary Unit and its main battalion, the 3/1 Marines, were responsible for clearing the area southeast of Lake Thar Thar until their departure in September. While Iraqi forces, namely a brigade from the 1st Iraqi Army Division, have asssumed responsibility for security in this area, it is likely that al-Qaeda has been able to reinfiltrate, as U.S. forces have carried out a series of raids against al-Qaeda targets here since the departure of the 13th MEU in September 2007.  Discovery of weapons caches and arrests of those linked to insurgents continued throughout 2008.  In mid-June, 63 people were killed in a car bomb attack in Hurriya.1  However, such mass attacks were rare.

In 2009, activity was largely focused on Fallujah and its environs.  The discovery of weapons caches in the area is extremely common, as well as the prescence of small criminal gangs who traffic in drugs or jewelry.  In April 2009, in the same week that Iraqi forces were attacked by a suicide bomber at their base in Habbaniya, Iraqi military and police conducted a large counterterrorism sweep in a southern industrial area of Fallujah. 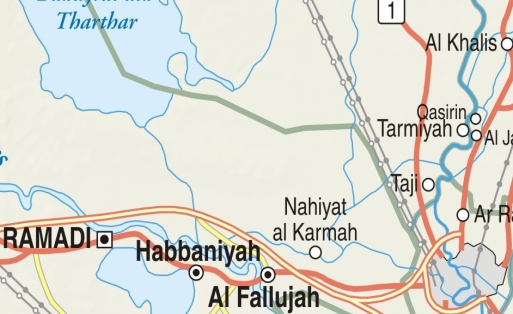