Western Iraq is comprised of a single province, Anbar, located to the west of Baghdad. It stretches northwest to the Syrian border and southwest to the Saudi Arabian border. The Euphrates River Valley represents the main line of communication in the province, with numerous cities and settlements lining its banks. Moving from west to east, the cities of al-Qaim, Rawah, Haditha, Hit, Ramadi, Habbaniyah, and Fallujah make up the main population centers of the province. Anbar’s population is almost entirely Sunni Muslim.

From 2003 to 2007 Anbar served as the primary base for the Sunni insurgency. Many of Anbar’s major cities acted as hubs for the road network al-Qaeda in Iraq (AQI) used to transport foreign fighters entering from Syria. The Euphrates River Valley was also used to store weapons and supplies used to carry out attacks in Baghdad. Despite two major U.S. operations to clear Fallujah during 2004, and continued operations throughout the summer of 2005, Anbar remained extremely violent. A 2006 Marine Corps Intelligence report concluded that victory in Anbar was out of reach for U.S. forces.

The Awkening Movement has its roots as early as the summer of 2005, with the Albu Mahal tribe in Western Anbar province.  After a rival tribe, the Salmanis, allied themselves with al-Qaeda, the Albu Mahal formed a counter-alliance with American forces.1  Soon, differences between AQI (which is fundamentalist Sunni) and other Sunni tribes emerged as Al-Qaeda began to attack local Iraqis in addition to coalition forces and the Shia.  AQI was also involved in skimming profits from local Sunnis in Anbar, and imposing harsh rules of law on citizens, especially women.

The extremely tentative nature of the Awakening and of Anbar province as a whole charged significantly with the August 21, 2006 assassination of Sheikh Abu Ali Jassim, who had encouraged many of his tribesmen to join the local police forces.  In addition to executing a well-respected tribal leader, Al-Qaeda hid Jassim’s body in a field, violating the Islamic practice of granting the deceased a swift burial.  This event angered many Sunnis and turned them against AQI.2

The Sons of Iraq

By the June 2006 arrival of Colonel Sean MacFarland and Major Niel Smith of the 1st Brigade of the 1st Armored Division in Ramadi, a change in Coalition tactics was clearly necessary.  MacFarland and Smith’s new plan called for “simultaneously engaging local leaders,” Sunni sheikhs, in an attempt to gain enough Iraqi recruits to retake Ramadi.  One of these Sunnis was Sheikh Abdul Sattar al-Rishawi.  After Al-Qaeda killed his father and two brothers, Al-Rishawi (also known as Abu Risha) had approached the US for aid to oust al-Qaeda.3   McFarland and Smith seized upon the opportunity to enlist local Iraqi support. On September 6, 2006, Al-Rishawi established the Anbar Salvation Council, an alliance of Sunni clans which grew to include over forty tribes, and 4,500 Sunni volunteers.4

On September 13, 2007, AQI insurgents assassinated Sheikh Al-Rishawi near his home in Ramadi.5  His brother Ahmed Abu Risha assumed the leadership of the movement.

By mid-2007, tribal recruiting for the Awakening had reached 14,000.6   In May 2007, fueled by tribal ties, the Awakening spread along the west bank of the Euphrates and into Baghdad.  Sensing opportunities to engage AQI throughout Iraq, the US began a nation-wide Concerned Local Citizens (CLC) program as a follow-on to the Awakening in Summer 2007.  Concerned Local Citizens were paid about $300 dollars per month and oversaw the formation of neighborhood watch groups that patrolled Iraqi communities and reported suspicious activity to coalition and Iraqi security forces.  They also pointed out al-Qaeda fighters, locations of house-borne IEDs, vehicle-borne IEDs, and deep-buried IEDs.” 7 This model was so successful that by August 2007, these watch groups were present in Ninewah, Diyala, Babil, Salah-ad-Din, Baghdad, and Shi’a communities in the South.8

By Spring 2008, the CLC program had reached nearly two-thirds of Iraq’s provinces and had enlisted over 70,000 Iraqis.9  In February 2008, The US changed the name of the “Concerned Local Citizens” (which in Arabic translated to “worried citizens”) to “Sons of Iraq,” or SoI.10

Integrating the SoI into the Iraqi Security Forces

With the increasing capacity of the Iraqi Security Forces (ISF) and the success of the Surge, Coalition forces began a transfer of authority over the SoI to the Government of Iraq (GoI) on November 10, 2008 which lasted until April 1, 2009.11  While the tranfer is complete, mutual mistrust between the SoI and GoI continues.  The SoI fear that the Shi'a leadership of Iraq may, for sectarian reasons, deny the former SoI the opportunities they enjoyed under control of the US.12  The GoI fears that by incorporating SoI into the ISF, they may also incorporate SoI who have loyalties to not only the SoI but also to Sunni insurgent groups.

Anbar province is unique in being the only province with an overwhelming Sunni majority.  Only 2% of Sunnis in Anbar voted in the 2005 Iraqi provincial elections, boycotting an electoral process they saw as unfair and under threat from insurgent groups.13  However, in January 2009, voter turnout in Anbar province was 40%.14  Additionally, whereas the Anbar Provincial Council in 2005 was dominated by one party (the Iraqi Islamic Party, or IIP), the council elected in January 2009 is made up of three political entities who won significant and roughly equal pluralities.  The first of the entities is the IIP itself, which is a religious party that represents Sunnis at the national level as well as on provincial councils in several provinces.  In Anbar, the IIP registered as the Alliance of Intellectuals and Tribes.  The second entity is the Awakening of Iraq and Tribal Independents, which is the political entity of the Anbar Awakening movement, under the leadership of Sheikh Ahmed Abu Risha.  The third party is the Iraqi National Project List (INPL), a nationalist party under the leadership of Saleh al-Mutlaq.

Recognizing the importance of constituency building, the IIP and INPL formed links with tribal parties.  For it's part, the Awakening of Iraq and Intellectuals coalition formed an alliance with an IIP-affiliated party.  These maneuvers can be understood within the context of political wranging in the looming shadow of December 2009 Iraqi National Elections.

11.  Claire Russo and Scott Weiner, "The Iraqi Government Assumes Control of the Sons of Iraq in Baghdad," Commentary, Institute for the Study of War, November 21, 2008; Multi-National Force Iraq Press Release No. 20090401-07, "Iraqi government assumes responsibility for all Sons of Iraq and resolves delays in salary payments," April 1, 2009. 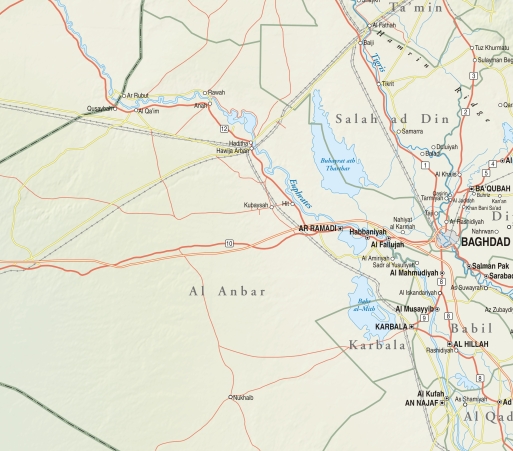