Tajiks and Pashtuns form the majority of the population. Ethnic minorities and Kuchi nomads also live in Kabul province. Dari is predominantly spoken in Kabul city, while Pashto is widely spoken in some districts of Kabul, such as Chahar Asyab, Deh Sabz and Mir Bacha Kot.

Each district has its own administrator and police chief. Haji Din Mohammad, the eldest brother of late famous Jihadi commanders Haji Qadir and Abdul Haq, is the governor of the province. Engineer Mir Abdul Ahad Sahebi is the mayor of Kabul, and General Mohammad Ayub Salangi serves as the chief of police in the province.

Security situation has deteriorated in the Kabul region over the past two years. Enemy groups now control parts of Kabul’s neighboring provinces, such as Logar and Wardak. These groups also carried out several high-level armed and suicide attacks in Kabul in 2008 and early 2009.

Suicide attackers stormed Kabul's most famous luxury hotel on 14 January, 2008, killing seven people.4  President Hamid Karzai narrowly escaped the fourth attempt on his life on April 27, 2008, after fighters attacked an Independence Day ceremony in Kabul.5  A suicide bombing targeting the Indian embassy in Kabul on July 7, 2008, killed at least 41 people and injured 141.6  On February 11, 2009, suicide bombers and gunmen launched simultaneous attacks on three government sites in Kabul city, including the Ministry of Justice, killing at least twenty and wounding over 50 people.7

Organized enemy groups, however, are not the only security threat. Many crimes such as kidnappings, armed robberies, and killings have increasingly become prevalent in Kabul.

Income per capita and living conditions are comparatively better in Kabul than any other province. An average of 61% of Kabul residents have access to electricity – 71% in urban areas, while only 29% in rural places.8

France is the lead nation in RC Capital, which is under the command of Brigadier General M. Stollsteiner. Responsibility for security in RC Capital was transferred to the Afghan National Security Forces on August 28, 2008; however, this move was principally symbolic and International Security Assistance Force (ISAF) remain in Kabul.9

The headquarters of ISAF is located in Kabul and serves as NATO’s operational central command.10  The ISAF headquarters commands the five Regional Commands and works with the government of Afghanistan, the United Nations Assistance Mission in Afghanistan (UNAMA), and other international and non-governmental organizations in implementing military and reconstruction efforts.11 The ISAF headquarter is separate from the RC Capital headquarters in Kabul. Over 1,700 multinational forces are stationed in the ISAF headquarters in Kabul.12  A total of 5,740 troops are present in the RC Capital.13  Kabul International Airport (KAIA) serves as the Forward Support Base (FSB) for the Kabul region. Hungary has responsibility for the FSB.14  KAIA is the primary airport in the country for both commercial and military flights.15 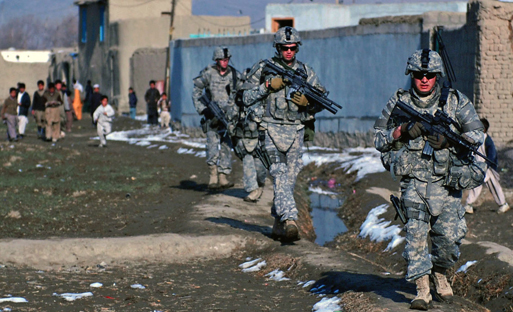