The Hindu Kush Highlands separate the northern region from the rest of the country. The Kotal-e Salang (Salang Tunnel) connects the northern provinces to Kabul. The Soviets used the route as their primary military and non-military supply line in the 1980's.3  Mountains cover more than 60% of the north, although terrain varies by province.  While Hindu Kush and Pamir Ranges cover around nearly all of Badakhshan province4, almost the majority of Kunduz province is flat land.5

The climate in the north is arid or semi-arid.6  The highest mountain ranges in the region – areas such as Tirband-e Turkistan crossing Faryab and Koh-e Khwaja Mohammad in Badakhshan — receive more rainfall. Insufficient water and a lack of irrigation systems limit agricultural development in the north.  Major rivers in the north are Kokcha River in Badakhshan and Takhar, the Balkhab River in Jowzjan and Balkh Provinces, and the Amu Darya River which separates Afghanistan from Central Asian republics.  Lack of hydroelectric power dams has prevented the use of these waters for electricity generation.

Security in RC North is among the best in the country. As the majority of the population in the north is non-Pashtun, the Taliban and al-Qaida have failed to establish a base there. Still, warlords, criminal groups, drug smugglers, and tribal feuds have destabilizing effects in RC North.

Uzbek leader General Abdul Rashid Dostum is remains an influential figure in the north. Dostum, whose hometown is in Jawzjan province, is a former pro-Soviet militia commander who later joined the mujahedeen to topple the Soviet government in 1992. He ruled northern Afghanistan under the Taliban until another Uzbek leader, Abdul Malik, Dostum’s rival and current leader of Afghanistan Liberation Party, colluded with the Taliban to depose Dostum in 1997.7   Dostum fled to Turkey, but later returned and joined the Northern Alliance.

President Hamid Karzai appointed Dostum as the Chief of Staff to the Commander in Chief of the Afghan National Army in March 2005. This largely ceremonial post was intended to reduce Dostum’s power in the north. In February 2008, Dostum was suspended on allegations of abducting a Turkmen rival leader, Akbar Bai.8

Trade between the northern provinces and Central Asia has flourished since the fall of the Taliban in late 2001. The construction of a 672-meter long bridge linking northern Afghanistan to Tajikistan through Shir Khan Bandar has also turned the northern region into a transit route between South Asia and Central Asia. Over 1,000 trucks cross the bridge each day.9  Projects are also underway to build railroads, power lines and water linkages between Iran, Afghanistan and Tajikistan. Trade between northern Afghanistan and Uzbekistan and Turkmenistan has also seen remarkable boost over the past seven years. A proposed gas pipeline project from Turkmenistan to India through Afghanistan and Pakistan – if implemented – could fundamentally change the socio-economic situation of the north. The project would generate an estimated annual revenue of $200 million for Afghanistan. It would also create more than 10,000 jobs for Afghans and allow Afghanistan 500 cubic meters of gas annually for its own consumption.10

Poppy eradication efforts have been largely successful in the north. Six out of the nine provinces were opium-free in 2008 and were expected to remain so in 2009.11  Opium cultivation in the provinces of Badakhshan, Baghlan, and Faryab was projected to be eliminated or reduced in 2009.12  However, narco-trafficking from the northern provinces into Central Asian countries remains a major challenge.

RC North is headquartered in Mazar-e-Sharif, the provincial capital of Balkh. Germany is the ISAF lead nation for the command. The 5,080 troops in RC North are commanded by Brigadier General Joerg Vollmer.13  Germany is the largest contributor of troops in RC North, where it has stationed 3,800 troops.  Germany has pledged to send additional 600 troops ahead of Afghanistan’s presidential elections slated for summer 2009.14

There are five Provincial Reconstruction Teams (PRTs) in northern Afghanistan. They are in the cities of Mazar-e Sharif, Balkh (led by Sweden); Kunduz, Kunduz (led by Germany); and Feyzabad, Badakhshan (led by Germany); Pol-e-Khomri, Baghlan (led by Hungary) and Maimana, Faryab (led by Norway). Despite relative security and stability in the north, reconstruction efforts in the region have been sluggish.15

The 209th Corps of the Afghan National Army is headquartered in Mazar-e-Sharif, under the command of Maj. Gen. Taj Mohammad. 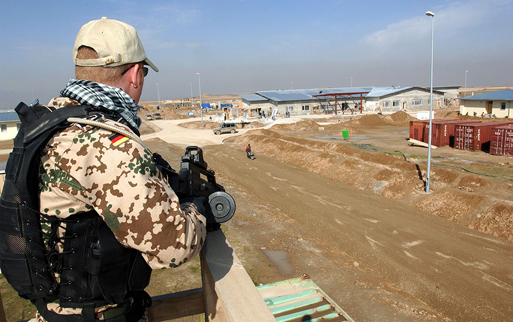