The southwestern belt runs from Fallujah down the Euphrates River corridor, through Sadr al-Yusufiyah, Yusufiyah, east to Mahmudiyah and south to Iskandariyah. Prior to Operation Phantom Thunder and its preparatory operations, this area was a key transit and supply route for Al-Qaeda in Iraq, linking its strongholds in Anbar Province with battlegrounds in and around Mahmudiyah, mixed areas to the south in Iskandariyah and Musayyib, and refuges in Arab Jabour and Hawr Rajab southeast of the city. Between the river and the road networks, al-Qaeda in Iraq had multiple avenues for shipping and storing munitions in this area to support attacks against Shi’a targets to the south in Babil Province and to the north in Baghdad.  This area was nicknamed the "Triangle of Death" in 2005-2006.

From September 2006 through October 2007, Colonel Michael Kershaw, commander of the 2nd Brigade, 10th Mountain Division (the Golden Dragons), had responsibility for the southwestern belt. The brigade was under the responsibility of Multi-National Division-Baghdad, until the creation of Multi-National Division Center in April 2007. The 2-10 was replaced by the 3rd Brigade of the 101st Airborne Division in November 2007.

The area of operations encompasses Mahmudiyah, Yusufiya, and the Euphrates River Valley. The area is predominantly Shi'a, particularly in the Highway 8 Corridor. As one moves west towards Anbar province, the area is almost entirely Sunni. That area was formerly a Ba'athist stronghold. As Sunnis were removed from the government, they helped foment the insurgency. Al Qaeda in Iraq was able to capitalize on this and relied on the territory as a sanctuary. Old Iraqi Army bases and weapons facilities provided the weapons and knowledge to conduct IED attacks against Coalition Forces. Further to the East, Highway 8, which runs from Baghdad through Mahmudiyah, is the major transit route from the city to the predominantly-Shi'a cities further south.

Over the first several years of Operation Iraqi Freedom, there was little or no permanent coalition presence in these areas. As a result, when Coalition Forces entered the territory in 2006, they had to fight their way into the area. They fought first and foremost to establish control over Yusifuyah and Sadr al-Yusifiyah, which lies about mid-way between Fallujah and Musayyib on the east bank of the Euphrates.  The 2-10 then used classic counterinsurgency tactics to spread outward from its position in Yusifiyah along the Euphrates River Valley beginning in January 2007.

Of the four belts, the southwestern belt received the least sustained attention during summer operations that were subordinate to corps-level Operations Phantom Thunder and Phantom Strike. In part, the Golden Dragons had already established security in the key terrain within their area of operations.  The US maintained a patrol base, Warrior Keep, in Sadr al-Yusufiyah. But there was no permanent presence opposite Sadr al-Yusufiyah across the Euphrates River. As US forces conducted clearing operations southeast of Baghdad in Hawr Rajab and Arab Jabour, and down the Highway Eight corridor, a lower force density was maintained to the west. This changed in November, when Multi-National Division – Center (MND-C) launched Operation Marne Courageous, an air assault by the 3rd BCT, 101st Airborne across the Euphrates River, establishing for the first time a permanent coalition presence in the Sunni villages west of the river.

Through 2008, the AQI presence in this area was largely removed. For the 3-101, attacks plummeted from an average of 106/week to an average twelve attacks per week. Furthermore, many of those attacks were a result of Coalition forces encountering old IEDs that were laid months or even years earlier. Other IEDs were often surface-laid, emplaced hastily and are ineffective. There was, however, a persistent threat from Shi'a extremist groups, which became apparent as violence broke out in late March 2008. MND-C sought to counter this violence with Operation Marne Piledriver, which began in April 2008 and aimed to support Iraqi Army forces in removing Shi'a extremist elements from the area of Mahmudiya.  Attacks between March 2008 and March 2009 in Mahmudiya fell by 70 percent.1  However, the discovery of weapons caches continues, and the area is still the target of attacks, such as the suicide bombing at a reconciliation conference in January 2009 which killed twenty-three people.2  As the US draws down from Iraq, Al-Qaeda may attempt to take advantage of the opportunity to promote sectarianism in the southwestern belt. 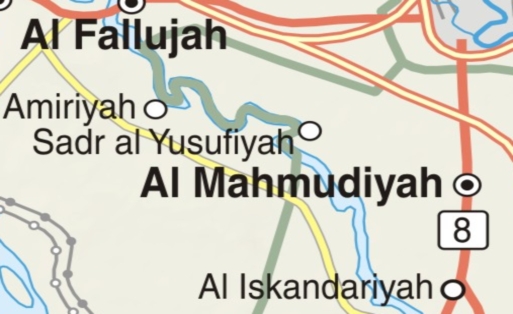