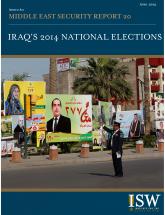 Download the PDF
by Ahmed Ali
Iraq’s 2014 national elections are taking place at a difficult time. The country is at a crossroads, presented with the possibility of widely different futures. Deteriorating security conditions frame political thought in ways that harken back to Iraq’s first national elections in 2005. The Iraqi state does not hold control of territory in some of Iraq’s key political provinces, such as Anbar, Ninewa, and Diyala. The disenfranchisement of Iraq’s Arab Sunnis; the rising threat of the Islamic State of Iraq and al-Sham (ISIS); and the activation of Ba‘athist groups collectively discourage electoral participation.
Shi‘a militias that threatened Iraq’s security in 2004 have reactivated in 2014, though Asai’b Ahl al-Haq (AAH), the Badr Organization, and parties affiliated with the Sadrist Trend are actively participating in elections as well. The political mobilization of these groups, some in competition with Prime Minister Nouri al-Maliki, demonstrates a retreat from Iraqi Shi‘a political unity; however, it also raises new concerns about public perceptions of the need for personal protection beyond what the state has been able to provide. The increasing threat of spillover from the Syrian war and high levels of violence in Iraq have cast doubt on the ability of Iraq’s national elections to generate an outlet of healthy political competition that empowers Iraq’s population to participate.
Security and local identity are dominant themes in the 2014 elections. This is a stark contrast to Iraq’s 2010 elections, which primarily involved strategies of ethno-sectarian unity. The major Iraqi Shi‘a groups in 2010 coalesced and formed the Iraqi National Alliance (INA). At the same time, the Iraqi Sunnis joined forces under the umbrella of former Prime Minister Ayad Allawi’s Iraqiyya alliance; and the Iraqi Kurds formed the Kurdistani alliance, unifying the efforts of the Kurdistan Democratic Party (KDP) and the Patriotic Union of Kurdistan (PUK). Instead, pre-election coalitions in 2014 have re-crystalized around primary stakeholders within the main Iraqi Sunni, Shi‘a, and Kurdish blocs, generating competition rather than unity.
Maliki’s State of Law Alliance (SLA) did not fare well in the provincial elections in 2013, causing Maliki to re-think his 2014 campaign. SLA member Salman al-Musawi stated on March 10, 2014 that the SLA is not dependent on political blocs in order to secure Maliki a third term, but rather is dependent on his popularity among voters.1 This message demonstrates a broader trend of targeting local communities for votes in the 2014 elections. Prime Minister Nouri al-Maliki’s SLA will again compete internally for Iraqi Shi‘a votes with the Citizens’ Bloc of the Islamic Supreme Council of Iraq (ISCI) and the Ahrar Alliance, representing the Sadrists. This internal Shi‘a competition may cause the national elections to serve as a referendum on Maliki’s continued rule.
The vote among Iraq’s Arab Sunnis may be split among Council of Representatives Speaker Osama al-Nujaifi’s Mutahidun (United) for Reform, Deputy Prime Minister Saleh al-Mutlaq’s Arabiyya alliance, and Ayad Allawi’s secularist Wataniyya Alliance. The Kurdish PUK and the KDP will also compete separately for the first time in several northern provinces for the Iraqi Kurdish vote. Rather than ethno-sectarian unity, 2014 pre-elections behaviors bear a new quality of principled pluralism. This may be a potentially positive development for Iraq, if electoral process and security remain intact.

The free, fair, and safe conduct of Iraq’s elections and the preservation of Iraq’s institutions are necessary for this positive outcome to occur. Successful elections will also be necessary to test the health of theIraq’s political system and the faith of the Iraqi people in that system as a means to provide for their own security. But such electoral conditions may produce new power dynamics within the national government that may threaten the interests ofIraq’s main political stakeholders, namely Maliki. Maliki has been in power for eight of the eleven years since the April 9, 2003 fall of Saddam Hussein. He has been calling for majoritarian rule and preparing to run for a third term. He is resolved upon one desired outcome.

Maliki’s ambition entails forming a government in which he becomes more dominant, with fewer players in the cabinet, and an opposition that is functionally outside the government. On one hand, the prospect of a real political opposition may energizeIraq’s political scene. However, the opportunity to form a political opposition in the presence of majoritarian rule and in the context of an urgent security demand is not clear. The development of a sect-based opposition is more likely, which will instead inflame tensions rather than provide a constructive outlet.