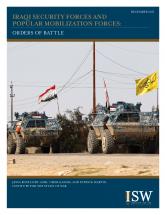 Institute for the Study of War

The liberation of the Islamic State of Iraq and al-Sh­am’s (ISIS) urban holdings in Iraq was necessary but not sufficient to secure America’s vital national interests. ISIS has lost neither the will nor the capability to fight, even as it withdraws into desert hideouts and sleeper cell formations in November 2017. Rather, dispersed ISIS militants have begun an insurgent campaign in northern and western Iraq as some of its foreign fighters have returned to their home countries to serve in ISIS’s external operations network.

ISIS reconstituted from the remnants of Al Qaeda in Iraq in just three years by exploiting political and security conditions. The U.S. must therefore ensure conditions do not allow jihadist groups to continue this cycle by forming under a new banner in coming years. The U.S. has partnered with the Iraqi Security Forces (ISF) to defeat ISIS in Iraq and progress toward this objective. The ISF must clear remaining ISIS cells, secure liberated areas, stabilize them, and enable their reconstruction. Ethnic, sectarian, and political tensions will likely prolong the conflict and potentially create openings for jihadists to exploit. U.S. decision makers will determine the number of troops and other forms of assistance necessary to stabilize the country and facilitate a viable political outcome that secures an independent, representa­tive, and unitary Iraqi state.

The U.S. must also ensure Iraq does not become a safe haven for, or beholden to, the leading state sponsor of terror, Iran. Iranian-backed actors have compromised formal Iraqi security structures. Iraq’s Ministry of Interior (MoI) is led by a member of the Badr Organization, which Iran created in the 1980s. The MoI is augmenting ISF operations in Ninewa and Diyala Provinces. The predominantly-Shi’a Popular Mobilization Forces (PMF) have filled crit­ical gaps left by thinning ISF in Baghdad, Kirkuk, and Salah al-Din Provinces in particular.

A spectrum of Iraqi groups comprise the PMF, including some loyal to Grand Ayatollah Ali al-Sis­tani, Iraqi clergy, Iraqi tribes, and Iranian actors. This wide spectrum of groups should not obscure the dangerous threat the PMF poses to Iraqi state institutions and U.S. interests. The PMF are a vector by which Iranian-backed proxies have compromised some of the ISF. The PMF are not guarantors of Iraqi state security because they challenge the Iraqi government’s monopoly on the use of force, even as they are nominally integrated into the state through complex structures.

The formal, nominal integration of the PMF into state-tolerated structures obfuscates rather than controls Iranian-backed powerbrokers. The Deputy Chairman of the Popular Mobilization Commission (PMC) that oversees the PMF, Abu Mahdi al-Mu­handis, was designated by the U.S. Treasury as a terrorist in 2009. He is a dual Iranian-Iraqi citizen. He advised Iran’s Islamic Revolutionary Guards Corps (IRGC) — Quds Force Commander Qassim Suleimani, facilitated attacks against U.S. forces in 2007 and 2008 as the commander of the terrorist organization Kata’ib Hezbollah, and has been con­victed by Kuwait of bombing Western embassies in that country in the 1980s. The official PMF spokes­person, Ahmad al-Asadi, overtly threatened U.S. forces in Iraq on August 14, 2017. An Iranian sig­nature weapon, the Explosively Formed Penetrator (EFP), killed a U.S. soldier in Iraq less than two months later on October 1, 2017.

PMF units, including Kata’ib Hezbollah, the Badr Organization, Asa’ib Ahl al-Haq, and Harakat al-Nujaba, conduct operations based on Iran’s pri­orities in both Iraq and Syria. They have occupied positions along both sides of the Iraq-Syria border to block anti-ISIS operations by U.S.-backed forces in eastern Syria. The PMF and the Iranian-directed forces have expanded their role in Iraq following the Iraqi Kurdistan independence referendum in September 2017. Iranian proxies and ISF launched military operations against Iraqi Kurdish forces in October 2017. They seized Kirkuk and surrounding security and economic infrastructure before advanc­ing further north and forcing Iraqi Kurdish forces to retreat across Iraq’s disputed internal boundaries.

Iranian proxies extended their control of terrain through this campaign against Iraqi Kurdistan and the campaign to recapture ISIS’ last urban hold­ings in western Anbar Province. Iran now has increased leverage over Iraq’s federal government and greater ability to coerce Iraqi Prime Minister Haider al-Abadi. Iranian proxy forces are posi­tioned in increasing numbers along the Iraq-Syria border and poised to seize key border crossings as of November 2017. Iranian proxies are destabiliz­ing Iraq, creating opportunities for jihadists, and positioning themselves to further disrupt the U.S. ability to operate against jihadists across the Iraq- Syria border. The effects of this destabilization will prevent the establishment of a stable and secure Iraqi state capable of defending its sovereignty and territorial integrity.

The PMC will likely endure as a permanent security institution in Iraq. The PMF’s elaborate command structure includes directorates that deliver mean­ingful combat support and combat service support to Iranian proxies. The PMF is, therefore, likely to constitute a permanent wing of Iranian-led forces within Iraq’s security apparatus, undermining Iraq’s monopoly on the use of force essential to its sover­eignty. The U.S. should not accept the PMC as a component of the ISF, even if the Iraqi government does. The U.S. must constrain Iran by supporting Iraqi forces intelligently and robustly as operations to clear ISIS from Iraq’s cities conclude.

Any U.S. strategy relying on a partnered force must proceed from a realistic assessment of its capabili­ties and intentions. The Institute for the Study of War completed an Order of Battle study to evalu­ate the capabilities and disposition of the ISF. This study also presents an Order of Battle of the PMF to help U.S. decision makers and forces on the ground recognize and remediate the presence of Iranian-backed militias within the ISF. The study updates and deepens previous scholarly works. The data cutoff for unit locations presented in this study is August 17, 2017; however, this report’s text and conclusions are based on unit movements through late November 2017.

This work juxtaposes the original areas of respon­sibility of the various Iraqi Army (IA) and Federal Police (FP) divisions with what were assessed to be their areas of deployment in August 2017, high­lighting potential future security risks outside of the current battle zones in Iraq. It also provides information on IA brigades’ affinity toward and cooperation with the PMF, highlighting increasing Iranian influence within the ISF. 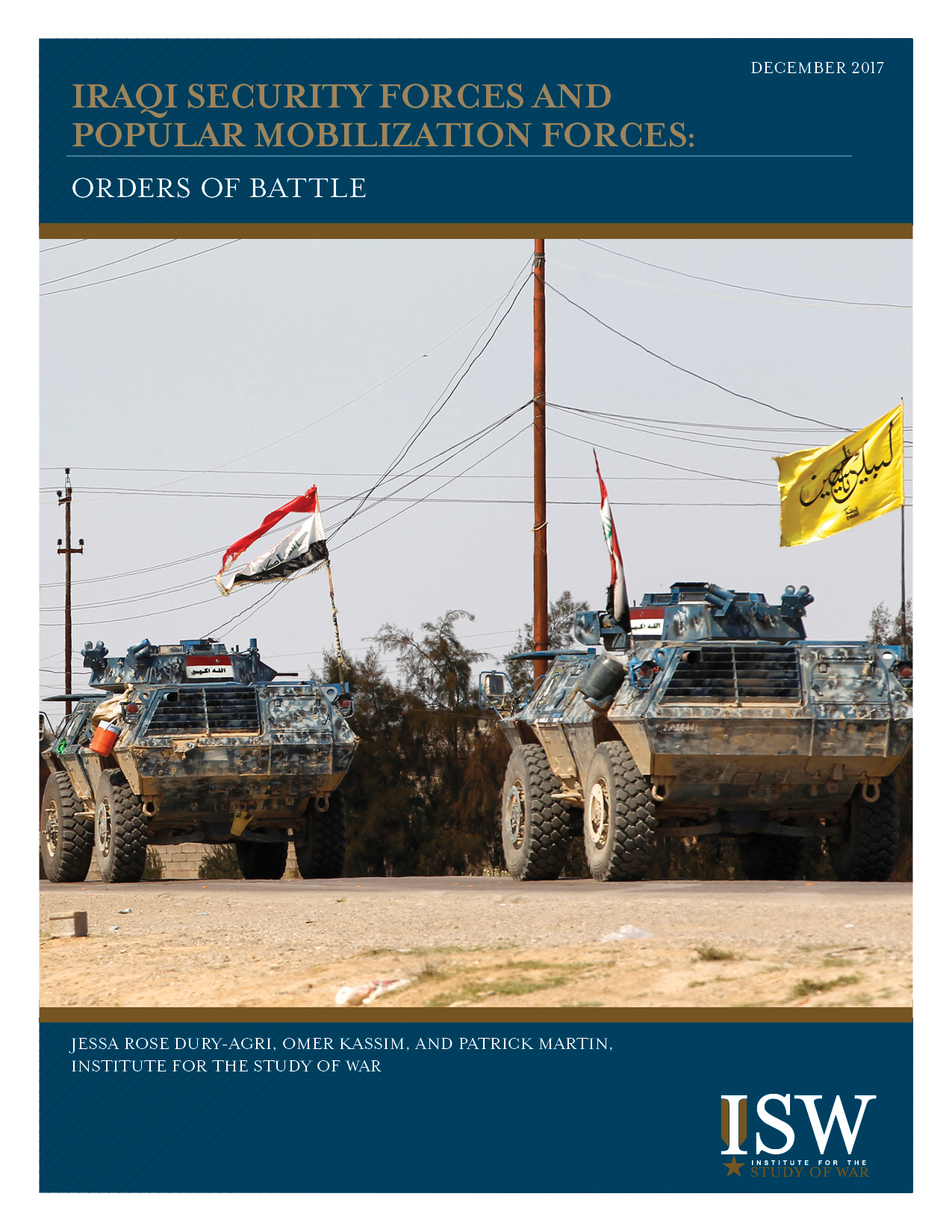