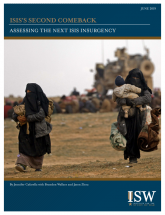 By Jennifer Cafarella with Brandon Wallace and Jason Zhou

The Islamic State of Iraq and Al-Sham (ISIS) is not defeated despite the loss of the territory it claimed as its so-called ‘Caliphate’ in Iraq and Syria. It is stronger today than its predecessor Al Qaeda in Iraq (AQI) was in 2011, when the U.S. withdrew from Iraq. AQI had around 700-1000 fighters then.  ISIS had as many as 30,000 fighters in Iraq and Syria in August 2018 according to a Defense Intelligence Agency estimate. ISIS built from the small remnant left in 2011 an army large enough to recapture Fallujah, Mosul, and other cities in Iraq and dominate much of eastern Syria in only three years.  It will recover much faster and to a much more dangerous level from the far larger force it still has today.

The slow-motion reduction of ISIS’s territory and strength initiated by President Obama and continued by President Trump gave the group plenty of time to plan and prepare for the next phase of the war.  It had a plan to recover ready before the “caliphate” fell and has been executing it during the anti-ISIS campaign conducted by the Iraqi Security Forces (ISF), the Syrian Democratic Forces (SDF), and the U.S.-Led Anti-ISIS Coalition. ISIS deliberately withdrew and relocated many of its fighters and their families from Mosul, Raqqa, and other important cities into new and old support zones in Iraq and Syria. ISIS’s forces are now dispersed across both countries and are waging a capable insurgency. ISIS retained a global finance network that funded its transition back to an insurgency and managed to preserve sufficient weapons and other supplies in tunnel systems and other support zones in order to equip its regenerated insurgent force.

ISIS began reconstituting key capabilities in late 2018 that will enable it to wage an even more aggressive insurgency in coming months. ISIS leader Abu Bakr al-Baghdadi asserted greater operational control over his forces in Iraq and Syria in June 2018 and is reconstituting command-and-control structures. ISIS is also reconstituting its capability to detonate waves of Vehicle-Borne Improvised Explosive Devices (VBIEDs) across Iraq and Syria - the signature of its early campaigns leading up to the conquest of Fallujah and Mosul in 2014. It has already detonated VBIEDs in liberated cities including Mosul and Raqqa. ISIS also resumed standardized media releases in July 2018, indicating that it has rebuilt key media capabilities.

ISIS’s insurgency will grow because areas it has lost in Iraq and Syria are still neither stable nor secure. In Iraq, ISIS has systematically eliminated village leaders and civilians who cooperated with anti-ISIS forces. Its goal is to weaken resistance and to fuel the population’s distrust of the Government of Iraq. It has re-imposed taxes on local populations in its historical support zones, displacing civilians and de facto controlling small pockets of terrain in Iraq. In Syria, ISIS is waging a three-front insurgency against the U.S.-backed SDF, the regime of Syrian President Bashar al-Assad, and Al Qaeda’s Syrian affiliate Hay’at Tahrir al-Sham (HTS). Its campaign degrades governance structures and halts reconstruction efforts, contributing to the perpetuation of state failure and violence in the Syrian Civil War.

ISIS will seek to reestablish territorial control in Iraq and in Syria. It will likely succeed if the U.S. withdraws. American support on the ground in Syria coheres disparate SDF elements that would almost certainly fracture if the U.S. leaves. The U.S. presence in Eastern Syria enables vital intelligence and air operations that could not be replaced if America withdrew. It also deters Turkey from invading northeastern Syria, which would at minimum cause the SDF to pull forces away from the Middle Euphrates River Valley to defend against Turkey in the north, creating even more space in which ISIS could re-emerge. A strong and capable SDF in eastern Syria is also necessary to prevent ISIS from using Syria as a base to fuel its campaign in Iraq.

ISIS’s next breakout success could be even more devastating than its 2014 campaign. Its external provinces outside Iraq and Syria are contributing resources to its insurgency in those countries while giving the organization renewed global momentum. ISIS declared the start of a new global campaign called the ‘Battle of Attrition’ on May 31, 2019. Its propaganda instructed its forces to seize terrain temporarily as a way to attrite their opponents. ISIS’s ability to campaign simultaneously abroad and in Iraq and Syria gives it new opportunities. Its successful reconstitution of a physical caliphate in Iraq and Syria would produce new waves of ISIS attacks in Europe and dangerously legitimize ISIS’s narrative of inevitable long-term victory.

The U.S. is repeating a critical mistake by deprioritizing this effort at a pivotal moment when our gains are at their most fragile. The U.S. must take immediate steps to dampen ISIS’s resurgence in Iraq and Syria, including halting and reversing America’s ongoing withdrawal from Syria. More American support to the SDF will be necessary. American partners and allies should contribute, but it must recognize that it is the only country with both the ability and moral clarity to lead this effort. The U.S. should also prioritize and expand humanitarian aid operations to help dampen the appeal of ISIS, especially among the large traumatized underage population living in displacement camps across the Middle East. These actions can help reduce the rate and scale of ISIS’s regrowth and provide the U.S. the time required to develop a more robust strategy truly to defeat ISIS and establish the conditions that will prevent another reconstitution.

Turkey will oppose increased American support to the SDF. The U.S. should focus its efforts on increasing the strength and capability of Arab SDF elements, which do not threaten Turkey as much as the Kurdish elements. Supporting these Arab groups will enable the U.S. to better combat ISIS’s insurgency, which is strongest in Arab areas, and will also decrease the SDF’s overall reliance on the Kurdish forces that Turkey opposes. The U.S. should condition increased support to the SDF on reforms of its behavior to ensure that it represents both Arabs and Kurds regardless of whether or not they support the political ideology of the SDF. These steps alone will not appease Turkey but they can reduce the likelihood that continued American efforts to find a durable resolution to the problem of ISIS in Iraq and Syria lead to increased tensions and the risk of conflict.

*Correction (July 23, 2019): The authors have retitled the assessed current phase of ISIS operations based on a review of statements released after the publication of this report. The report stated that ISIS announced a new global campaign titled “Battle of Attrition” on May 31, 2019. The authors assessed at the time of publication that this announcement signaled the conclusion of the “Soldiers Harvest II” campaign. ISIS in fact continued to use “Soldiers Harvest” to refer to its ongoing operations after this report’s publication. The authors still assess that ISIS has entered a new phase of military operations. The new phase has been marked by a more aggressive focus on attrition that exploits the conditions set during the previous campaign. Therefore, the campaign that occurred between July 2018 and May 2019 is now titled “Soldiers Harvest II (A)” and the campaign underway since May 2019 is now titled “Soldiers Harvest II (B).”