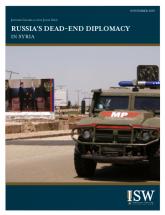 By Jennifer Cafarella with Jason Zhou

Syrian President Bashar al-Assad remains the primary obstacle to peace in Syria. He has consistently spoiled any diplomatic process. His actions show that he will accept only the full defeat of his opponents. Even then, he will punish those who previously defied him, as he has done in former pro-opposition communities including in Aleppo and Dera’a Provinces. Yet he cannot win the war, so the West cannot resign itself to accepting his “victory” for the sake of stability. He does not have the resources to reconquer and reintegrate all of Syria.

U.S. Presidents Barack Obama and Donald Trump mistakenly expected Russia to compel Assad to accept a diplomatic process. The Kremlin seeks to thwart any Western effort to replace Assad and to instead reach a superficial political settlement that legitimizes his regime and neutralizes his opposition. Buying into Russian-driven efforts thus empowers Russia to undermine American interests. Russia cannot deliver Assad to the negotiating table, moreover. Assad depends on Russian (and Iranian) military help but is not controlled by them. A fragile power balance exists between them in which Assad often gains an upper hand. Russia has limited bandwidth and resources to commit to Syria, which Assad knows and exploits.

Russia has waged a sophisticated campaign of linked military and diplomatic efforts to shape the trajectory of the war in accord with its interests since 2015. Russia has strengthened Assad’s military position, shaped inter­national negotiations, and gained recognition as a diplomatic arbiter. The U.S. still has an opportunity to displace Russia from the center of Syrian diplomacy, however. Russia’s inability to persuade or compel Assad to respect the terms it brokers is costing it influence within opposition communities.

The West’s current diplomatic framework in Syria, UN Security Council Resolution (UNSCR) 2254, may do more harm than good under current circumstances. UNSCR 2254 calls for a ceasefire and the drafting of a new Syrian Constitution followed by UN-monitored elections. These fall far short of the opposition’s initial demands, which included Assad’s departure and a transitional government, and thus represent a major compromise to Assad’s backers. The implemen­tation of UNSCR 2254 will likely alienate opposition communities and empower Salafi-Jihadist Groups. Assad will manipulate it to allow his further consolidation.

The U.S. is pursuing the wrong diplomatic goal. American policymakers are biased toward viewing a cessation of hostilities as the most important sign of diplomatic progress in Syria and thus overlook opportunities to shape Syria’s long-term trajectory. The U.S. must widen its aperture for what diplomacy in Syria can and must achieve. The U.S. should set as its overarching goal keeping space open for political competition within Syria and reinvigorating and relegitimizing a stale and discredited diplomatic process.

The U.S. can shape Syria’s long-term trajectory with relatively limited resources. American economic pressure limits the scope and scale of what Assad and his backers can achieve, thereby preserving space for competition. The U.S. should further constrain Assad’s access to funds, including through sanctions and pressing the UN to apply greater scrutiny to the misappropriation of humanitarian aid in Syria. The U.S. should also continue to prevent the normalization of the regime’s atrocities by supporting European efforts to prosecute former and current regime members for war crimes at minimum.

The U.S. should work with the UN and other partners to launch a new diplomatic initiative to begin an intra-Syrian dialogue through conferences and Track II initiatives that include as much of Syrian society as possible. The existence of such a process is valuable even though it will not soon end the war nor gain wide participation at first. It can provide an outlet for Syrian civil society to remain active as well as a mechanism for the U.S., UN and other Western states to apply political pressure on Assad and his backers. It can isolate states with problematic roles such as Turkey and incentivize changes in their behavior in the future. It could also provide a new way to incorporate groups currently excluded from the UNSCR 2254 process, such as the U.S.-backed Syrian Democratic Forces (SDF).

Within Syria, the U.S. should do more to gain local leverage and connect it to a reinvigorated diplomatic framework. The U.S. should recommit to its partnership with the SDF in Eastern Syria to build credible and inclusive governance as an alternative to both Assad and Salafi-Jihadist Groups. The U.S. should deploy addi­tional forces to work with the SDF to stabilize the east and block further Turkish incursions. The U.S. State Department should also expand its local dialogue with Syrian communities in order to broaden America’s understanding of their needs and goals, including in Eastern Syria where U.S. forces operate, and should explore ways to support civil society groups in Northwest Syria attempting to dampen Al Qaeda’s influence. The U.S. should also seek opportunities to reengage in other parts of Syria as conditions on the ground change. For example, the brewing insurgency in Southern Syria may generate new local leaders with whom the U.S. can engage.

President Trump is unlikely to take these steps given his desire to disengage from the Middle East. Yet the U.S. does indeed have vital national security interests in Syria including preventing the growth of ISIS, Al Qaeda, and other Salafi-Jihadist Groups; blocking and ultimately reversing the long-term military presence of Iran and Russia in Syria; and halting attacks that amount to ethnic cleansing against the Syrian Kurds. If the Trump Administration remains committed to its current course, it is virtually certain to fail to secure the vital inter­ests of the U.S. in Syria, including reaching an enduring diplomatic settlement to the war.