The Harirud River flows from the mountains of central Afghanistan, through the provincial capitals of Cheghcharan and Herat, and then along the Afghan-Iranian border. The river has many tributaries, irrigating the areas of agricultural land in the region. However, agricultural production has suffered, as a drought has depleted water levels to historic lows. Disagreements over water rights issues between the western provinces and Iran have also undercut agricultural production.

There is a dense concentration of population along these rivers, especially in Herat. Farahrud and Harutrud are two smaller rivers that flow through Farah Province. The Murghab River flows across Badghis Province into Turkmenistan, but a lack of dams and irrigation systems prevents the water from being used for agriculture.
Herat is the most populated province in the RC West, followed by Farah. Ghor is the most sparsely populated, as almost 95 percent of the province is mountainous or semi-mountainous.2

Ethnic distribution in the region is uneven. Over eighty percent of population in Farah is Pashtun—primarily from the Barakzai, Alizai and Noorzai tribes, which are also predominant in southern Afghanistan.3  In Ghor province, over 90 percent of the population is Hazara and Aimak.4  Herat is almost evenly divided by Pashtuns and Tajiks. Other ethnic minorities in Herat include Hazaras, Kuchis and Aimaks.5  In Badghis, more than half of the population is Tajik, but the districts of Ghormach and Balamurghab are mostly Pashtuns.6

Taliban activity spread from the south into Afghanistan’s western provinces in 2005. By early 2006, Coalition and Afghan Security Forces battled the Taliban in Herat and Farah provinces. Despite the fact that the RC West is divided between Tajiks, Pashtuns, Hazaras and other ethnic minority groups, there is no systematic violence on ethnic lines.

Alleged Iranian support for insurgent groups in western Afghanistan is also of particular concern. Iran was also publically reported to have provided weapons, including improvised explosive devices (IEDs), to the Taliban as early as April 2007.7  A ten-ton cache of weapons with Iranian, Russian and Chinese markings was seized in Ghorian District of Herat, only a few kilometers from the Iranian border in the fall of 2007.8  The weapon shipment had crossed the Iranian border into Afghanistan.9

Herat is the richest province in Afghanistan in terms of agriculture and industry. Most of Afghanistan’s trade with Iran passes from Herat through the Islam Qala crossing and into Iran. Herat City is also connected to Kabul, Kandahar, Iran and Turkmenistan through the Ring Road– making Herat the hub for trade in the region.

The construction of roads and railways has helped boost trade in western Afghanistan, and connect western provinces to Iran and to northern Afghanistan and Central Asia. A 191-kilometer railway built by Iran connects Khaf of Iran to Herat.14  Iran’s Vice President Pirviz Davoodi announced in Kabul in February 2009 that Iran would also help construct another rail line to connect the province to the Sher Khan crossing along the border with Tajikistan.15  This will be the first railway in Afghanistan linking the west to the northeast. The planned 1,200-kilometer rail line is scheduled to be completed in five years with a budget of $2 billion.

The drug trade is a destabilizing factor in the west. In contrast to northern Afghanistan, the RC West is still plagued by opium cultivation. Over 15,000 hectares of poppies were cultivated in Farah in 2008.16  Some 900 hectares of opium were grown in Herat and Badghis in 2008.17  Yet, Ghor was declared poppy-free in 2008 and is projected to remain so this year.18  In addition, the western provinces (particularly Herat) are the primary smuggling route for drugs to Iran and Turkmenistan. More than one-third of Afghan opium is trafficked to Iran through western provinces.19  The flourishing drugs trade has fostered increasing corruption in the government and has stimulated criminality in the region.

The four Provincial Reconstruction Teams (PRTs) in the RC West are located in Herat City, Herat (led by Italy); Chaghcharan, Ghor (led by Lithuania); Farah City, Farah (led by the United States); and Qala-e Naw, Badghis (led by Spain). RC West is headquartered in Herat City under the command of Italian Brigadier General Paolo Serra. There are roughly 3,000 ISAF troops in the RC West, most of which are Italian.20  Italian Foreign Minister Franco Frattini announced in February that his country would increase its military force in Afghanistan by about 500 ahead of the Afghan elections later this year.21  Still, the number of troops in the region was recently assessed as insufficient.22

One of the five Afghan National Army Corps – the 207th Afghan Army Corps – is stationed in Herat, under the command of Major General Fazal Ahmad Sayar.23 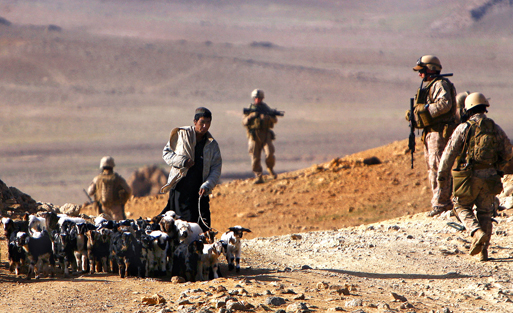