ISW is closely tracking developments in and around Ukraine. Click here to see a full list of ISW's Ukraine Conflict Updates. In late February 2022, ISW began publishing these daily synthetic products covering key events related to renewed Russian aggression against Ukraine. These Ukraine Conflict Updates replaced ISW’s previous “Indicators and Thresholds for Russian Military Operations in Ukraine and/or Belarus,” which we maintained from November 12, 2021, through February 17, 2022. That document is no longer updated.

Russia has destabilized Ukraine and sought to return it to the Russian orbit for years and may now seek to do so through force. ISW’s Russia team predicted and then exposed Russia’s effort to integrate Belarus into the Russian military in 2020 and 2021. Now, over a hundred thousand Russian troops are massed on Ukraine’s borders, including in Belarus, where they could support a third front in a potential Russian invasion of Ukraine.

In the winter of 2021-2022, ISW and CTP launched a forecast series in response to the Russian military build-up on Ukraine's border. The reports in this series are listed below.

Russian President Vladimir Putin is using the crisis he created by mobilizing a large military force around Ukraine to achieve two major objectives: first, advancing and possibly completing his efforts to regain effective control of Ukraine itself, and second, fragmenting and neutralizing the NATO alliance. Russian military preparations can support a massive invasion of Ukraine from the north, east, and south that could give Putin physical control of Kyiv and other major Ukrainian cities, allowing him to dictate terms that would accomplish the first objective. Such an invasion, however, might undermine his efforts to achieve the second objective because it could rally the NATO alliance around the need to respond to such a dramatic act of aggression. An invasion would also entail significant risks and definite high costs. A Russian military action centered around limited military operations in southern and southeastern Ukraine coupled with a brief but widespread and intense air and missile campaign could better position Putin to achieve both aims as well as reduce the likely costs and risks to Russia. 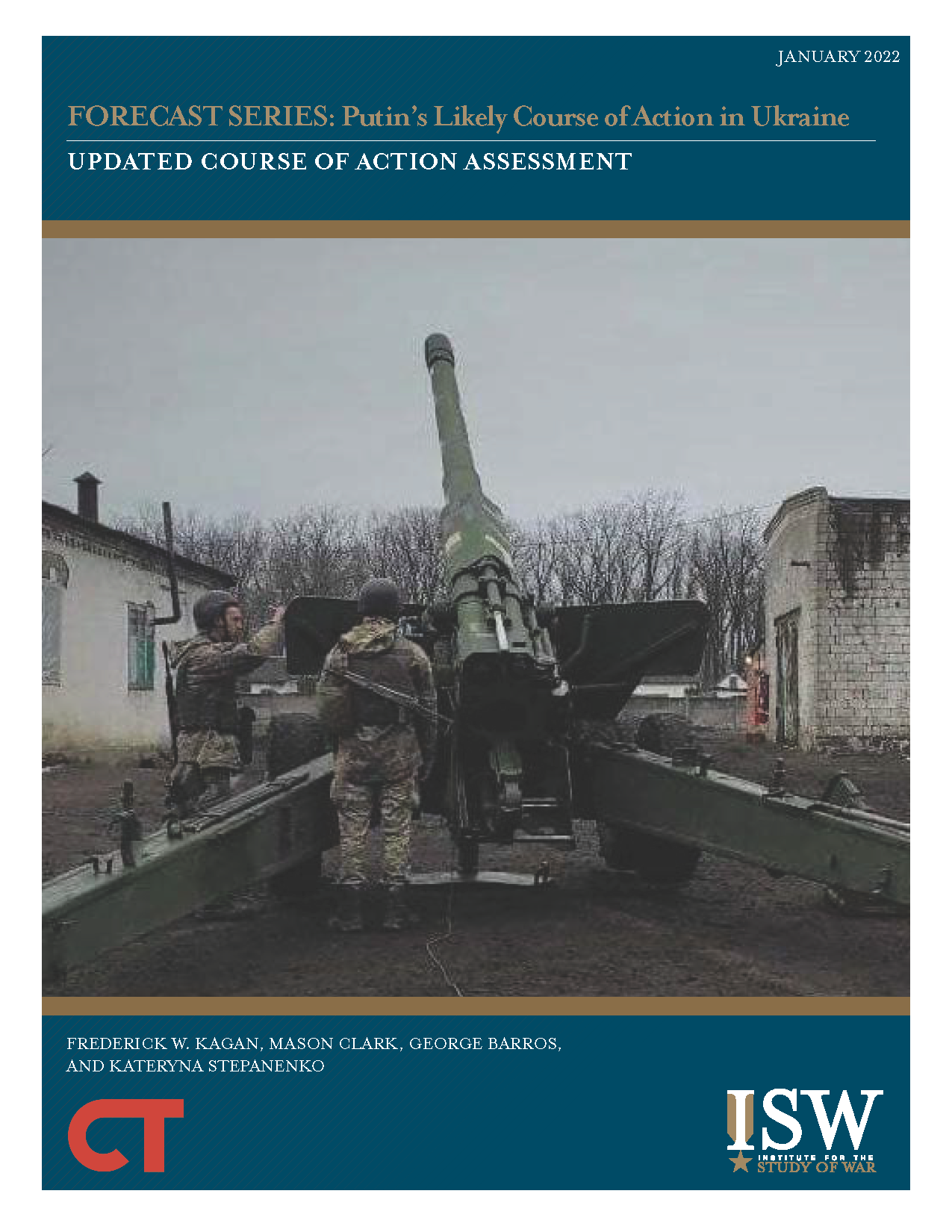 Russian President Vladimir Putin is amassing a military force on and near Ukraine’s borders large enough to conduct a full-scale invasion. Western intelligence agencies have reportedly intercepted Russian military plans to do so by early February. Visible Russian military activities and these plans so clearly support preparations for an invasion that it seems obvious that Putin really might invade if his demands are not met.

Putin is rarely so obvious, however, and a massive Russian invasion of Ukraine would mark a fundamental transformation of the approach he has taken for two decades to advance his interests and respond to threats. We cannot dismiss the possibility that such a transformation has occurred. The United States, NATO, and Ukraine must seriously consider the risk of a Russian invasion of Ukraine and prepare military, diplomatic, and economic measures to deter and respond to that threat. 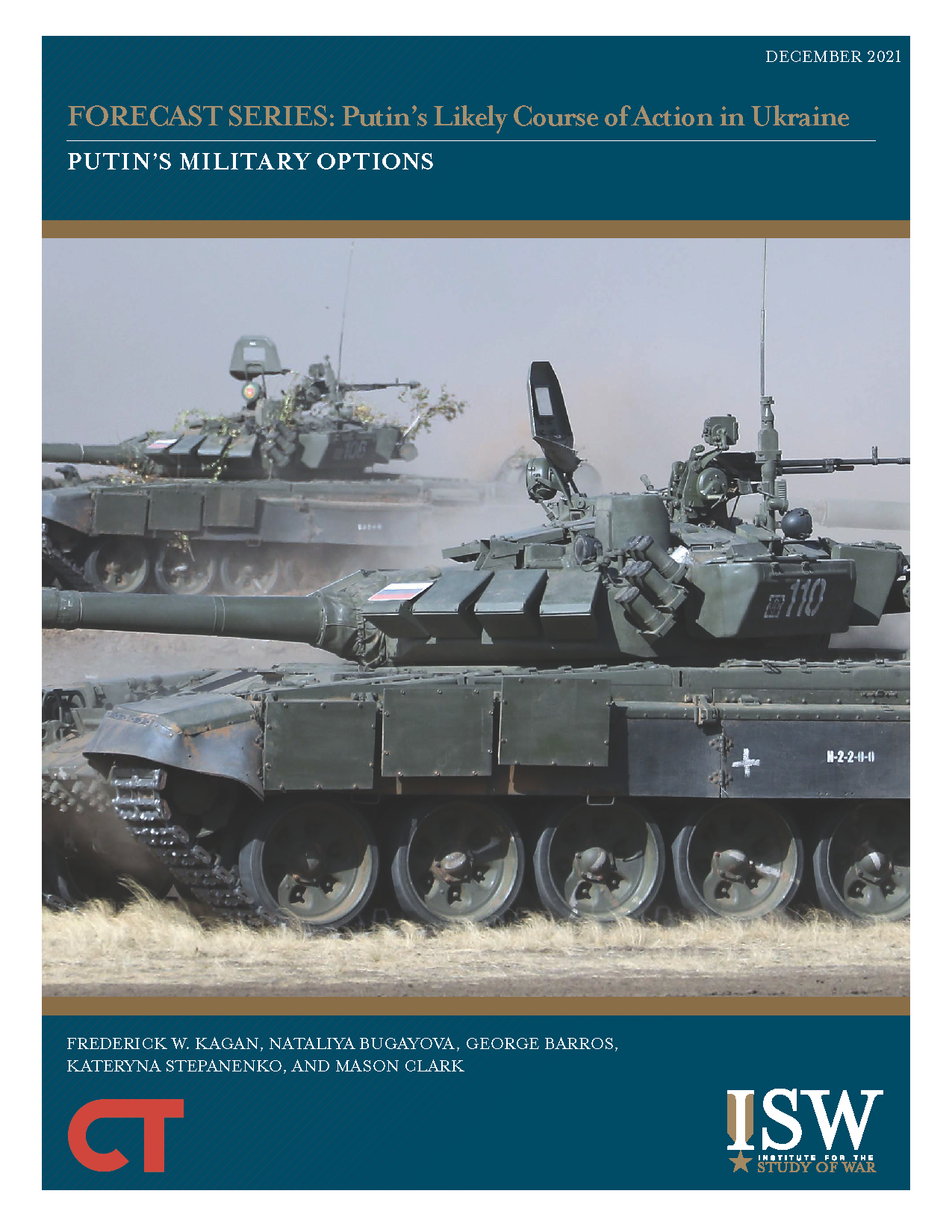 Russian President Vladimir Putin is amassing a large force near the Ukrainian border and reportedly has a military plan to invade and conquer most of unoccupied Ukraine.  Western leaders are rightly taking the threat of such an invasion very seriously, and we cannot dismiss the possibility that Putin will order his military to execute it.  However, the close look at what such an invasion would entail presented in this report and the risks and costs Putin would have to accept in ordering it leads us to forecast that he is very unlikely to launch an invasion of unoccupied Ukraine this winter. Putin is much more likely to send Russian forces into Belarus and possibly overtly into Russian-occupied Donbas. He might launch a limited incursion into unoccupied southeastern Ukraine that falls short of a full-scale invasion.

A full-scale Russian invasion of unoccupied Ukraine would be by far the largest, boldest, and riskiest military operation Moscow has launched since the 1979 invasion of Afghanistan. It would be far more complex than the US wars against Iraq in 1991 or 2003. It would be a marked departure from the approaches Putin has relied on since 2015, and a major step-change in his willingness to use Russian conventional military power overtly. It would cost Russia enormous sums of money and likely many thousands of casualties and destroyed vehicles and aircraft.  Even in victory, such an invasion would impose on Russian President Vladimir Putin the requirement to reconstruct Ukraine and then establish a new government and security forces there more suitable for his objectives.

Click here to read ISW and the Critical Threat Project's reports on the Russian military buildup near and potential invasion of Ukraine. These reports unpack Putin's likely calculations and use them to forecast his strategy. They provide critical insight for US and Western leaders and policymakers.

Click here to read ISW's running assessment of Russia's military activity near Belarus and Ukraine. This document is regularly updated.

Click here to see a list of ISW's Belarus updates. Launched near-daily in late 2020 and early 2021, these reports provide moment-to-moment insight into Russia's efforts to integrate the Belarusian military and subordinate the Belarusian state.